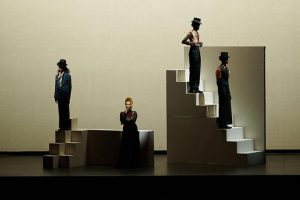 2021’s International Woolmark Prize consists of one of its strongest-ever round-ups of finalists, with Bethany Williams, Casablanca, Kenneth Ize, LECAVALIER, Matty Bovan, and Thebe Magugu all being put forward for the esteemed award. In celebration of the award, and because things have to be a bit different this year due to the pandemic, the IWP has tapped Solange Knowles‘ multidisciplinary platform, studio, and creative agency Saint Heron to create a video capturing and honoring the six finalist’s work.

Created by Solange Knowles, directed by Wu Tsang, styled by Ib Kamara and set to the Gio Escobar’s composition of “Standing On The Corner Art Ensemble,” the film — titled Passage — is a motion portraiture that’s packed with a star-studded cast wearing the collection. We see Dionne Warwick, Dominique Jackson, SahBabii, Joi, and KeiyaA all working the camera, all while the set acts as a theatrical backdrop for the collections.

Passage gives the collections life, exploring sustainability and creative touchpoints including “contemplation, courage, optimism, vulnerability, discipline and strength.” Six acts comprising stage, nature and surrealism (with the ending feeling very Wes Anderson) come together to celebrate the collections and the designers in their own rights, and as whole, it feels ceremonious and expressive of what went into creating the works.

Speaking on the short film, Knowles said: “In continuing Saint Heron’s world-making practice, Passage further explores my interest in theatrical production through the translation of identity, spirit, philosophy and creation. Whether it be through album artwork, stage design, or filmmaking, I’ve always sought to create new visual languages that encompass the expressions my other works cannot communicate. I’m inspired to expand these processes through the Saint Heron Agency with a wider scope of collaborations and projects. To reflect on and honor the creative process with the 2021 International Woolmark Prize finalists, Passage aligns with Saint Heron’s mission to reverence creation as life, from abstraction to being. I’ve been a longtime fan of Wu Tsang’s work and to be able to work alongside her, the Saint Heron team, and all of the incredible artists and designers in the film, really fortifies the ethos of collaboration and communal creative exchange that we wish to continue to embody.”

You can watch Saint Heron’s Passage above. The International Woolmark Prize winner will be announced on June 10, 2021.

In case you missed it, here’s what HYPEBEAST has to say on whether Virgil Abloh should design Liverpool’s next kit.
Source: Read Full Article