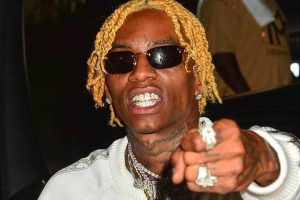 Soulja Boy has seemingly confirmed that his newest album, Swag 4, is set to feature a Kanye West diss track. The feud between the two rappers was first ignited when Soulja claimed that he was originally supposed to be featured on West’s latest studio album, DONDA. Much to his dismay, his verse was then cut from the track, “Remote Control.” He later added fuel to the fire by publically asking Kanye West to apologize to Taylor Swift.

Soulja took to Twitter to announce that he was dropping Swag 4 at midnight as well as added, “Kanye west diss on the album tonight.” Since DONDA‘s release, Soulja has continuously called out West on social media and went as for as criticizing ‘Ye for his past actions. While it is still unclear what the diss track will say, the song is going to be one to look out for on Soulja’s next album. It is also expected that this Soulja Boy and Kanye West feud will be referenced in Drake’s new album, Certified Lover Boy. Whether or not this will garner a response from ‘Ye himself will depend on how the tracks are received.

Elsewhere in music, Kid Cudi has said he is willing to work with Lil Nas X.
Source: Read Full Article