SPOILER: 'The Falcon and the Winter Soldier' Midseason Trailer Teases a Major Showdown 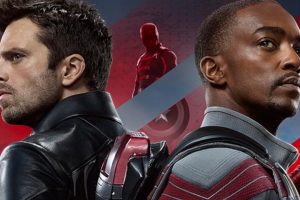 With only two episodes left in the season, The Falcon and the Winter Soldier seems to be gearing up for a major showdown between Bucky Barnes, Sam Wilson and John Walker/the new Captain America.

The battle was teased in the show’s recently released midseason trailer; Bucky and Sam confront John following his public murder of one of the Flag Smashers in the previous episode, and they tell the new Cap that they “don’t want anyone else to get hurt.” John is evidently still angry by the death of Hoskins, and based on the tension that has been building over the last few episodes, he’s more than ready to physically fight Bucky and Sam — now more than ever after he injected himself with the Super Soldier serum. The new Cap warns the two that they don’t want to go down this road but Bucky reluctantly contradicts his statement, and the three prepare to deal with their conflict.

In addition to the looming battle, writer Malcolm Spellman teased that fans can expect an exciting cameo in episode five. “There are characters in our series who I would love to see partnered with like – it’s a very, very grounded character – partnered with one of the big world-shakers like Thor or someone like that,” he said in a recent interview. “The personality is so strong, it’s an episode five character. I’d love to see that character with Thor.”

Watch the midseason trailer above. The Falcon and the Winter Soldier episode five premieres April 16 on Disney+.

In other entertainment news, the voice actor of Apu has apologized for voicing an Indian character.
Source: Read Full Article