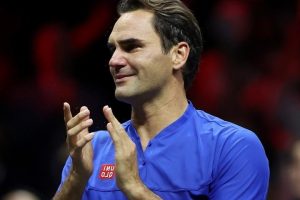 Tennis GOAT Roger Federer said a heart wrenching goodbye to the sport earlier this week when he played his final match at the Laver Cup.

Federer ended his career playing alongside his friend a longtime rival, Rafael Nadal. This season, Federer made the return back to the courts after a year and a half of injuries that have sidelined the legendary player. Though that is the case, Federer’s star power still drew in major crowds as they watched the duo lose 4-6, 7-6, 11-9 in a double match against Frances Tiafoe and Jack Sock. Despite the loss, the match was bigger than just the game itself, as it signified the official retirement of the forever tennis icon. Just last week, Federer made the announcement on his social media that he would retire following the Laver Cup.

The Swiss legend left the court in tears post-defeat, evidently filled with emotions as it would be the last time he sets foot on the court in a professional competitive setting. His peers and the audience around him gave Federer a standing ovation as they celebrated the milestone with him. Over the course of his 24-year career, Federer has garnered 20 Grand Slam wins on top of many records broken. He currently holds the record as the only tennis player, man or woman, to have five consecutive US Open titles, as well as five consecutive Wimbledon crowns.

Sports fanatics worldwide have taken to Twitter to celebrate the GOAT. Take a look below at some of the reactions to Federer’s retirement.