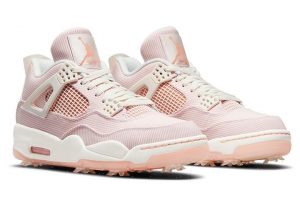 In 2020 Jordan Brand broadened its golf footwear catalog with multiple renditions of the Air Jordan 5 G, and 2021 has given all of the attention to the Air Jordan 4 G. Following the “White Cement” makeover release and reveal of Bubba Watson’s special PE for the Masters Tournament, the silhouette is now returning to the spotlight with the unveiling of its “Sail/Apricot Agate” colorway.

Heavy summer vibes are found on this fairway-ready option. Its base layer is dependent on seersucker materials that alternate between its titular hues to form its build, channelling somewhat of a pink lemonade-esque theme. The cages, mid-foot netting, eyestays, laces, tongue tabs and heel counters are all dialed to a “Sail” hue, while the Jordan branding on the both sides of the tongues and the heel’s Jumpman olds are treated with “Apricot Agate” filling. Midsoles color-block between “Sail” backgrounds and blush pink Air units and exposed stitchings up front. The spiked outsoles are whipped up with a pastel pink tone to bring together its entire look.

No release date has been confirmed just yet, but note that Nike will be dropping these shortly for $220 USD.