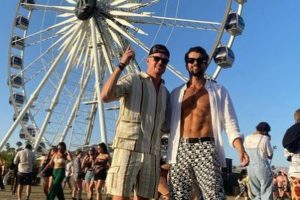 How does a billionaire attend Coachella? By private jet of course.

Rich-lister and Zuru Toys’ boss Nick Mowbray, Stolen Girlfriends designer Marc Moore and Rhythm and Vines’ co-founder Hamish Pinkham were all spotted at the first weekend of the three-day party in Indio, California, in the Coachella Valley to enjoy some of the world’s biggest music acts. It was the first festival in two years following Covid-19 disruptions.

Mowbray, who has hosted his own mini-festivals at his mansion in Coatesville, made a last-minute decision to head to the festival and did so in style, arriving by private jet into Palm Springs International Airport.

Along for the ride was Los Angeles-based Kiwi, Kristian Barbarich of Heartbreak Island fame. The boys then caught up with Barbarich’s former co-star and now US reality star, Harry Jowsey.

Over the weekend the boys were seen enjoying themselves at an after-party famous for celebrity attendance at the stunning Zenyara Estate, owned by millionaire and philanthropist Michael Scott and described as “an oasis in the desert” in the heart of Palm Springs.

On the Friday at Zenyara, legendary EDM group Swedish House Mafia reunited to play a private Spotify Party at the estate in front of a star-studded audience, including Ty Dolla $ign, Doja Cat and Euphoria actress Chloe Cherry.

Meanwhile, Pinkham, our leading Godzone festival organiser was at Coachella to fly the flag and get inspiration.

“Coachella Festival sets the trends for the festival season and provides lots of inspiration for what we are trying to do with R&V – delivering a world-class festival experience here in NZ,” Pinkham tells Spy.

Pinkham, who was at the festival with wife Roma, says the production and stage lighting design were insane, with huge LED walls broadcasting the show to the 100k-plus crowd.

He says many of the shows, such as those of Swedish House Mafia and Billie Eilish, were created by Kiwi creative designer Ben Dalgleish.

Pinkham thought The Weeknd was a fitting replacement for Kanye West, who pulled out.

“He held the crowd for the closing set with Swedish House Mafia, who were back together again after a 10-year absence and a highlight of the festival. They brought the party to Coachella.”

Before leaving for Coachella, the Pinkhams had a drink with Swedish DJ Axwell at Los Angeles hot spot E.P. & L.P, before Axwell’s performance with Swedish House Mafia on the Sunday night.

The couple wound down at a private villa party afterwards with Flume, Tove Lo, SG Lewis and Australian of the Year Dylan Alcott.

Pinkham gave some hints on who might be coming down to Godzone, saying “watch this space” for Fatboy Slim, who is keen to return. Acts like Dom Dolla, Freddie Gibbs, Tchami and Denzel Curry are looking to be Downunder at some stage soon.

Fashion is a huge component at the festival and Moore definitely hit his stride partying with desert-chic friends, filling his heart with fun times, and, most importantly for a fashion designer, getting inspired.

Riverdale star KJ Apa and his partner, Clara Berry, were also there.