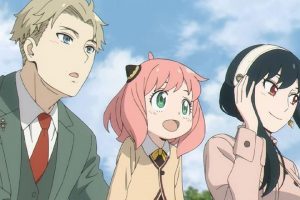 This year’s most popular new anime series, Spy x Family, has officially announced an October 1 premiere date for Part 2 of Season 1. With a dozen episodes released so far, 13 new episodes are set to arrive to round out the first season.

In a minute-long teaser for Part 2 released last month, Agent Twilight, also known by Loyd Forger, is seen looking to stop a terrorist bombing while joined by the rest of the Forger family — consisting of the pink-haired telepath Anya and career assassin Yor. The following episodes will also look to adapt the “Doggy Crisis” Arc in which the Forgers adopt a pet dog that has the ability to see the future. While unconfirmed, the success of the first dozen episodes should be enough to warrant the development of Season 2 or a movie spinoff.

For those that have yet to catch the series, below is a synopsis from Crunchyroll:

World peace is at stake and secret agent Twilight must undergo his most difficult mission yet—pretend to be a family man. Posing as a loving husband and father, he’ll infiltrate an elite school to get close to a high-profile politician. He has the perfect cover, except his wife’s a deadly assassin and neither knows each other’s identity. But someone does, his adopted daughter who’s a telepath!

Stay tuned for more trailers and updates to arrive in the coming weeks.

Elsewhere in entertainment, HBO’s House of the Dragon has been renewed for a second season following a record-breaking premiere.
Source: Read Full Article