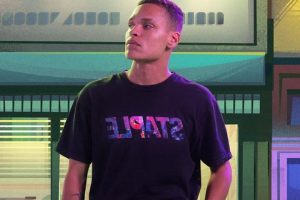 The titular streetwear brand, STAPLE is launching a collaborative collection with the Netflix‘s highly-anticipated adult animated series, Entergalactic. The Kenya Barris-produced film has garnered much attention with the its star-stacked cast.

Entergalactic is an original animated series from the mind of Kid Cudi and Barris. Cudi will be releasing his 10th studio album along with the release of the series, also titled Entergalactic. Other big names like Timothée Chalamet, Laura Harrier, Vanessa Hudgens, Jaden Smith, Teyana Taylor and Macaulay Culkin are slated to be a major part of the voice cast. The upcoming collaboration with STAPLE takes inspiration from the storyline of the series and its unique characters, bringing to life the world created by Cudi.

Using the vibrant graphics and colorful animation style of the series, the collection features both apparel items and accessories including the red “Closure” hoodie worn by the main character Jabari. The same “Closure” graphic appears as a skate deck with the signature STAPLE pigeon motif. STAPLE puts its stamp on the ENTERGALACTIC with a release of t-shirts featuring vivid animated graphics to highlight the most memorable scenes within the series. Other garment include a long sleeve, jacket, socks and beanie co-branded. In accessories, the skate deck is one of three unique items, which also include a STAPLE x ENTERGALACTIC magazine and a point and shoot YASHICA 400 negative film camera.

The collection goes live starting on September 30 on Netflix Shop and STAPLE with pieces ranging from $40 to $175 USD.