‘His Heels Are Completely Dug In’

President Trump agreed to open the government for three weeks amid continuing border-wall negotiations, but he insisted that he hadn’t backed down from any of his demands. Stephen Colbert said on Monday that the president’s approach seemed less like a strategy and more like recalcitrance. Or worse.

“His heels are completely dug in. When asked if he would accept less than $5.7 billion for his wall, Trump said: ‘I doubt it.’ So just to be clear, he’s making the exact same offer backed by the exact same threat, but somehow he expects different results. Well, you know what they say: The definition of insanity is Donald Trump.” — STEPHEN COLBERT

Colbert poked fun at Trump for insisting on Twitter that he wasn’t conceding anything by reopening the government.

“And believe me, folks, I know races. Many people call me a race-ist.” — STEPHEN COLBERT

While he was on the topic of Trump’s tweets, Colbert pointed to one in which the president claimed, without apparent proof, that illegal immigration had already this year cost the country nearly $19 billion — and he gave the figure down to the dollar.

“Those are some really specific numbers. In fact, that tweet — do I have this correct? — that tweet scores exactly 4,394.907 on my bullcrapometer.” — STEPHEN COLBERT

The former Starbucks chief executive Howard Schultz announced over the weekend that he might run for president in 2020. The news was not met with much enthusiasm — and that includes on late-night TV. Colbert said that after two years of Trump, he was not eager to hand the presidency to another C.E.O.

“To all the billionaires threatening to run for president: No thanks. We’re too full for seconds!” — STEPHEN COLBERT

“They need new hobbies. I tell you what, can’t Richard Branson just build a day camp for these guys to keep them off the streets?” — STEPHEN COLBERT

“So it would be Mr. Pumpkin Spice Latte taking on an actual pumpkin spice latte.” — TREVOR NOAH, showing a picture of Howard Schultz next to a picture of President Trump

James Corden had a cynical take on a report by Tinder that it sees its highest number of users in the middle of January.

“Researchers at Tinder have released some interesting user information, and it’s particularly appropriate for tonight. Apparently, the most popular time to use the dating app is right now, in January, and particularly on Monday evenings. Yeah, in winter, after the holidays, on a Monday. So literally when you’re at your most depressed.” — JAMES CORDEN

“According to The Washington Post, when President Trump gives tours of the White House and shows people the Lincoln Bedroom, he remarks how tall Lincoln was and how small the bed is. Said Trump, ‘That proves he used to sleep like me — in a fetal position, and crying!’” — SETH MEYERS

“Howard Schultz could be running for president in 2020. Or as they call it at Starbucks, venti venti.” — STEPHEN COLBERT

Every so often, Jimmy Kimmel uses some sleight of ear to make Washington sound a lot more risqué than it is.

It is not for us to ask why Abraham Lincoln and Shrek are sharing a milkshake. We can only sit and wonder if Shaquille O’Neal will figure out what they’re doing without seeing them.

Viola Davis just debuted “Two Sides,” a new documentary mini-series on TV One examining watershed moments in the history of confrontation between law enforcement officers and the black community. She’ll speak to Jimmy Kimmel on Tuesday. 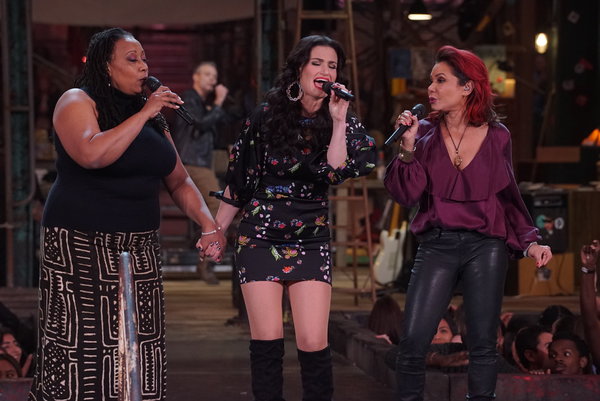 What was supposed to be a live broadcast of “Rent” went awry when the lead actor injured his foot in dress rehearsal. (Fallon, on “The Tonight Show,” joked: “The actor’s fine, but doctors say he’s got to wear a cast for about 525,600 minutes.”) The solution? Air a recorded dress rehearsal instead. Our critic grappled with how to review something we weren’t really supposed to see.

The Best Movies and TV Shows New to Netflix, Amazon and More in January

The 20 Best TV Dramas Since ‘The Sopranos’

Seven TV Shows That Are Perfect for Multitasking

END_OF_DOCUMENT_TOKEN_TO_BE_REPLACED

END_OF_DOCUMENT_TOKEN_TO_BE_REPLACED
We and our partners use cookies on this site to improve our service, perform analytics, personalize advertising, measure advertising performance, and remember website preferences.Ok