‘Do Not Steal Cough Medicine’

A sentencing hearing for Michael Flynn, the president’s former national security adviser, went south on Tuesday after a judge berated him and suggested that Flynn’s efforts to mislead federal investigators warranted prison. The judge, Emmet G. Sullivan, encouraged Flynn to accept his offer to postpone the sentencing, so that he could have extra time to prove the value of his cooperation with prosecutors.

Sullivan held Flynn’s feet to the fire, even floating the question of whether his crimes amounted to treason (although prosecutors never charged him with that). On “The Late Show,” Stephen Colbert was happy to review some of the hearing’s most squirm-inducing moments.

“Even though Flynn pleaded guilty to lying to the F.B.I. last week, Flynn’s lawyer submitted a sentencing memo explaining it wasn’t Flynn’s fault — because ‘agents hadn’t warned Flynn it was a crime to lie to the F.B.I.’ Of course, good point! How is he supposed to know? They gotta tell him! Just like how hospitals all have to post signs that say, ‘Do not steal cough medicine and then burn down this building.’” — STEPHEN COLBERT

“Flynn’s lawyers seemed ready to argue that their client had been tricked into lying. Yes, the F.B.I. has a clever way to trick anyone who works for Trump into lying: They ask them a question. It’s called entrapment.” — STEPHEN COLBERT

James Corden responded to the news that the Trump Foundation would dissolve, after New York’s attorney general filed a scathing lawsuit accusing it of violating campaign finance laws.

“I just think it’s beautiful that even though he’s busy with the presidency, Trump still makes time for his lifelong passion: driving organizations into the ground.” — JAMES CORDEN

“To be clear, the Trump Foundation is different from the Trump administration, which, thanks to the Russia investigation, is also dissolving under court supervision.” — JAMES CORDEN

Trevor Noah confessed that he was surprised Trump had ever founded a charity organization in the first place.

“I’m going to be honest with you guys — I’m even shocked that Trump had a charity. I always thought the only Trump charity was the women who agree to have sex with him.” — TREVOR NOAH

“President Trump’s re-election campaign has established a special hotline that supporters can use to call and leave a message thanking Trump for his service. Or, just as likely, he’ll pick up. [impersonating Trump] ‘No, I’m not busy — tell me I’m great!’” — SETH MEYERS

“A perfume company in Portland recently launched the first-ever perfume made with marijuana. The perfume is made from essential oils found in cannabis, but contains no THC. I’m pretty sure marijuana perfume already exists — it’s called marijuana. I think Reg has been wearing this perfume for the last four years.” — JAMES CORDEN, referring to his sidekick and “Late Late Show” bandleader Reggie Watts

Can you handle 22 musicals in 12 minutes?

Jimmy Kimmel had a talk with God — a.k.a. Billy Crystal — and found out that the Lord is close friends with Francis (Frank Sinatra, that is, not the pope).

Willem Dafoe, who plays Vincent Van Gogh in a new movie, “At Eternity’s Gate,” will join Jimmy Fallon on “The Tonight Show” on Wednesday. 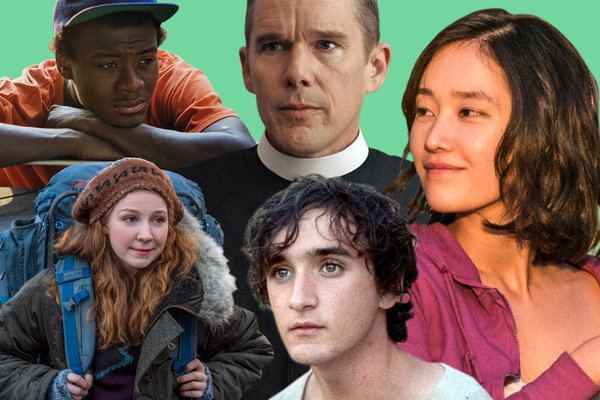 Have you checked out our film critics’ best-of-2018 lists yet? Manohla Dargis and A.O. Scott agreed on “Roma,” “BlacKkKlansman,” “Happy as Lazzaro,” “First Reformed” and “Monrovia, Indiana,” and disagreed on others.