‘Not a Particularly Good Speech’

Trump’s delivery was, by the president’s standards, restrained and uneventful. But Colbert gave it no high marks.

“This was not a particularly good speech, but what it lacked in quality it made up for in length. This speech was like watching paint lie.” — STEPHEN COLBERT

Exaggerating the relative strength of the United States economy, Trump told Congress, “We are considered far and away the hottest economy anywhere in the world.” That put Colbert in mind of one of Trump’s more infamous moments, from 2006.

“It is so hot, if it wasn’t my economy perhaps I’d be dating it.” — STEPHEN COLBERT, referring to a statement the president made on “The View” about his daughter Ivanka

“She showed great restraint, did not stick out her tongue once. She was chewing on it for a while, but did not stick it out!” — STEPHEN COLBERT

Trevor Noah also broadcast live, with his writers facing an even bigger time crunch than Colbert’s because “The Daily Show” starts earlier, at 11 p.m. Eastern. But they pulled through, delivering quips about nearly every major aspect of the speech.

“Just a few minutes ago, President Trump finished the second State of the Union address — and yes, his tie was crooked when he walked in. Trump walked past 600 people and not a single one of them had the balls to tell him. In fact, at some point Mike Pence was like, [adjusts tie] ‘This is the way ties should be from now on.’ ” — TREVOR NOAH

The Trumps invited a grade-school boy named Joshua Trump, who is not related to the president but has complained of being bullied over his name, to attend the speech. Noah called it a masterful strategic move.

“Inviting this kid is a pretty savvy move by Trump. It combines two major goals of his family: Melania’s campaign to stop bullying, and Donald’s campaign to replace Eric.” — TREVOR NOAH

At one point in the speech, Trump said, “If there is going to be peace and legislation, there cannot be war and investigation.” Noah found that easy to poke fun at.

“O.K., that didn’t make sense, but it rhymed. I wonder if Trump just wrote a bunch of rhymes to try and stop the investigation. He was just sitting in front of the mirror like, [impersonating Trump] ‘Life is fuller without Robert Mueller! Any collusion is an illusion! If you lock up the orange … nothing rhymes with orange. O.K.’ ” — TREVOR NOAH

Elsewhere, Trump spoke in braggadocious terms about how Congress had more women than ever. Noah felt the need to remind the president that most of those women belong to the opposition party.

“Yo, Donald Trump is a rock star, guys. He just took credit for the Democrats electing more women. That is such a rock ’n’ roll move.” — TREVOR NOAH

Trump has struggled with teleprompters in the past; this time, Noah confessed to being impressed with Trump’s performance.

“There was one thing we can all agree on: He read really well. Yeah, he’s really improved. Like, I don’t know if he’s ready for a second term, but he’s definitely ready for the second grade. I am so proud of him.” — TREVOR NOAH

“I saw that pretty much all the Congressional Democratic women wore white, head to toe. Take a look at that. In response, the governor of Virginia was like, ‘Oh sure! When they do it, it’s O.K.?’ ” — JIMMY FALLON

“A woman in Germany is claiming to be in love with an airplane. ‘I know how to cure her!’ said Spirit Airlines.” — SETH MEYERS

Spike Lee talked to Colbert about Trump’s refusal “to denounce the alt-right” after the infamous Unite the Right rally in Charlottesville, Va., in 2017.

Here’s James Corden in a “When Harry Met Sally” parody — with Billy Crystal.

Bret Baier, the chief political anchor for Fox News, will sit down with Colbert. That could get interesting. 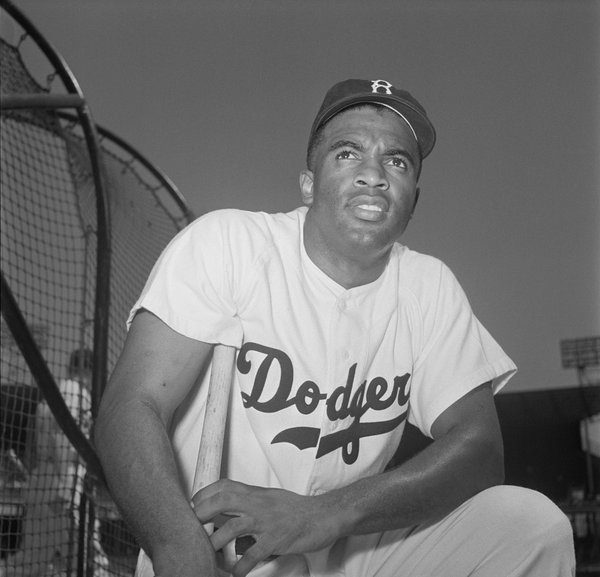 In honor of Jackie Robinson’s centennial, the Museum of the City of New York is showing never-before-seen photographs of the pioneering baseball player.