‘A Cocoon of Bitterness’

The midterm election results are looking worse every day for President Trump and the Republicans. With late results still arriving in a number of races, things have generally been coming up roses for Democrats.

Stephen Colbert seized on reports that Trump was growing despondent as the news rolled in.

“With Trump lashing out in every direction, it’s no wonder that most staffers are trying to avoid him. Yes, they’re all holed up in the one place he’ll never go: a salad bar.” — STEPHEN COLBERT

“But this is all par for the course. As one official who used to work in the White House put it, ‘The Trump administration has been so consistently off the rails that days like today just blend into everything else.’ Ah, just one of those typical days where each moment of hollow malice blends into the next, when the future and the past narrow into a speck of dim rage racing forever into the vacuum of the president’s mangled, unquenchable ego. Mondays, am I right?” — STEPHEN COLBERT

“I read that Trump’s been in such a bad mood that his staffers are avoiding him. It gets awkward when they try to hide in the broom closet only to hear Melania say, [whispering] ‘Get your own spot.’” — JIMMY FALLON

“Multiple sources told The Los Angeles Times that since the midterm elections, President Trump has, quote, ‘retreated into a cocoon of bitterness and resentment.’ When she heard this, Hillary Clinton was like, ‘Oh, great, now you’re going to take this job from me too?’” — JAMES CORDEN

Melania Trump vs. … Who?

The White House announced on Wednesday that Mira Ricardel, a senior national security official, would be reassigned to a different position. The news came a day after the office of the first lady, Melania Trump, issued a statement saying Ricardel “no longer deserves the honor of serving in this White House.”

Trevor Noah said the Trump administration’s high rate of turnover had taken a turn toward the absurd.

“Honestly, I don’t even know who this is. Mira Ricardel? Who is this person that they’re firing? Like, they’re running out of people we know to fire. This is like ‘Walking Dead,’ Season 6. ‘Oh no, they killed — Derek?’” — TREVOR NOAH

“Over the weekend a man in New Jersey was charged with a D.U.I., and he told the police that the reason he drank so much was because the Jets suck. That story again: A man in New Jersey has been drunk for 50 years.” — JIMMY FALLON

“In the opinion of the present attorney general of the United States, if you’re not a Christian, you won’t be a good judge. It’s right there in the Constitution: ‘Congress shall make no law respecting the establishment of a religion, yadda, yadda, yadda, what would Jesus do?’” — STEPHEN COLBERT on Matthew Whitaker, the acting attorney general, who said in 2014 that judges should have “a biblical view of justice”

In honor of the Country Music Association Awards, Jimmy Kimmel recorded an all-country edition of Mean Tweets, with Nashville stars reading insults about them from random Twitter users.

What We’re Excited About on Thursday Night

Michelle Obama, the former first lady, will sit down with Jimmy Kimmel on Thursday to talk about her new book, “Becoming.” 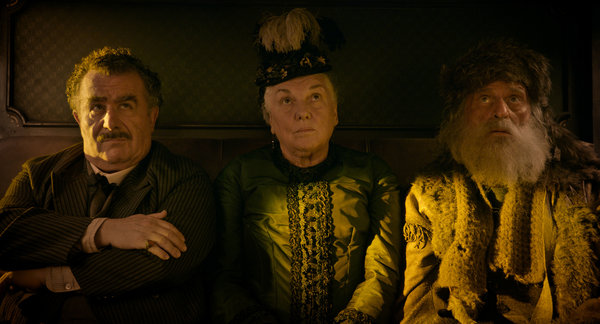 With “The Ballad of Buster Scruggs,” Netflix is taking a decisive step into movie theaters. But only a few of them.