Stephen Colbert Goes on a Roll With Robert Kraft Puns

The story surrounding Robert Kraft’s sex solicitation trial just keeps getting more salacious. Late last week, The Miami Herald reported that Li Yang — the owner of the massage parlor where Kraft, the billionaire owner of the New England Patriots, is accused of paying for sexual acts — had partied with President Trump and even helped Chinese donors gain access to the president.

Stephen Colbert couldn’t pass up the opportunity to make a few lowbrow puns based on the reported crimes. (Actually, more than a few: By the end of the segment, he boasted of telling nine straight massage parlor jokes. )

“Kraft has pleaded not guilty, and Saturday we learned that he has assembled a legal dream team consisting of multiple high-profile Florida criminal defense attorneys. Multiple? How many people does he need to get him off?” — STEPHEN COLBERT

Along the way, he also emphasized how threatening the revelations about Yang’s activities could be for Trump.

“National security experts say that Yang ‘could pose a threat, presenting opportunities for espionage or blackmail targeting the president and his inner circle.’ Targeting your inner circle, by the way, also available at her massage parlors.” — STEPHEN COLBERT, quoting from an article in Mother Jones

Late-night comics made fun of Trump last week for seeming to refer to Tim Cook, Apple’s chief executive, as “Tim Apple” during an event in the Oval Office. But few expected to still be talking about the flub nearly a week later.

Trump, however, has not let the news die. He falsely claimed to donors on Friday that he had, in fact, used Cook’s last name, Axios reported. And on Monday he felt the need to defend himself again, with a different story. This time, he said on Twitter that he “quickly referred to Tim + Apple as Tim/Apple as an easy way to save time & words.”

“As we all know from his two-hour speeches, the president hates to waste time with words.” — JIMMY KIMMEL

“How can anyone have such thin skin? Could there be a chemical in the self-tanner he’s using?” — JIMMY KIMMEL

Conan O’Brien and his sidekick, Andy Richter, riffed on the news in their own characteristically offbeat way.

CONAN O’BRIEN: Last week, President Trump called Apple C.E.O. Tim Cook ‘Tim Apple.’ [audience laughter] You hear the laugh that got? That’s a real thing the president said, and it’s going to do better than anything I say tonight. No, he did — he called him Tim Apple, which makes no sense. Andy, it’s like if I called you ‘Andy Sidekick.’

O’BRIEN: I knew it! That’s all you see when you look at me.

“President Trump spent the weekend at his Mar-a-Lago resort in Florida. By the way, that sentence was written two years ago, and yet it still works every Monday.” — SETH MEYERS

“Last month, Congress refused to give him 5.7 billion for his wall, and now he’s asking for 8.6. It’s like asking a girl out and then after she says no, proposing.” — JIMMY FALLON, referring to Trump’s requests for border wall funds

Jimmy Kimmel recapped Part 1 of the season finale of “The Bachelor,” which has been taking some unexpected turns.

The Los Angeles Galaxy are about to unveil a statue of David Beckham, and James Corden organized an elaborate prank to help ruin the moment.

John Turturro, who stars with Julianne Moore in the new film “Gloria Bell,” will sit down with Colbert on Tuesday. 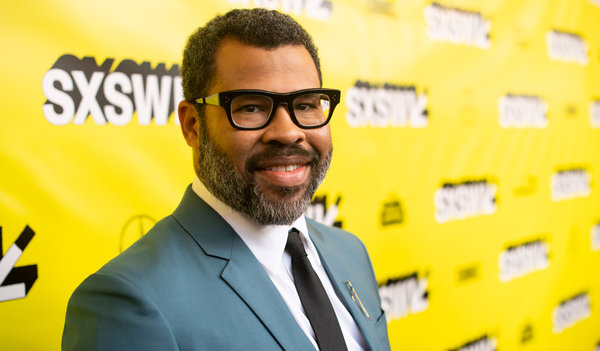 At South by Southwest, the reaction to Jordan Peele’s new movie, “Us,” was electric.