Even Longer Than ‘Obama’s Pauses’

Stephen Colbert returned from a weeklong break on Monday and dove into a takedown of President Trump’s rambling speech at the Conservative Political Action Conference on Saturday.

It was a historically long speech — but its most memorable moment may have come at the very beginning, when Trump shared a long, very tender embrace with an American flag onstage.

“He talked for two hours and two minutes, making it ‘the longest presidential oration in American history.’ Which is impressive, because some of Obama’s pauses were almost an hour.” — STEPHEN COLBERT, quoting from an article in The Atlantic

“He is dry humping Old Glory! I believe that is the first time a flag has ever volunteered to be burned. Just full Kevorkian.” — STEPHEN COLBERT

Jimmy Kimmel made fun of the entire conference, which gathers many of the major players in conservative politics but particularly those on the far right.

“CPAC, if you’re not familiar, is basically what would happen if Judge Jeanine Pirro headlined the Fyre Festival. It’s a lot of very angry white people.” — JIMMY KIMMEL

“It is the largest gathering of people who believe vaccines are witchcraft in the world.” — JIMMY KIMMEL

Kimmel said he wasn’t impressed with the official name of the winter storm that swept the country over the weekend.

“We’re sending warm wishes to those of you who are digging your way out of Winter Storm Scott. Why’d they name a storm ‘Scott’? I really don’t know. Probably someone at the Weather Channel forgot to get their nephew a birthday present.” — JIMMY KIMMEL

“When I hear Scott, I think of a co-worker who uses the microwave to heat fish. Scott isn’t a storm name.” — JIMMY KIMMEL

“Scott’s the name of your mom’s new boyfriend, not a storm.” — JIMMY KIMMEL

Colbert Catches Up on Cohen’s Testimony

Colbert was on vacation last week, so he missed Michael Cohen’s congressional testimony — one of the biggest moments in the investigation into Trump’s ties to Russia and his activities on the 2016 campaign trail.

Colbert zeroed in on a moment when Cohen described talking to the first lady, Melania Trump, on the president’s behalf about his reported affair with the pornographic film actress Stormy Daniels.

“Always the sign of a healthy relationship. [impersonating Trump] ‘Babe, I never cheated on you. Now, I would prefer any further questions about my affection and my loyalty go to my lawyer, who has prepared a signed affidavit attesting that I love you.’” — STEPHEN COLBERT

To put things right in the world, James Corden and the comedian Reggie Watts traveled to Thailand (and New Jersey) and reunited the Jonas Brothers. Or something. (Spoiler: They probably would have reunited anyway. In any case, they’ll be on Corden’s show all week.)

According to the comedian Colin Quinn, Florida’s problem is simply that it peaked too early. And he doesn’t think much of the United States at large, either. “This country,” he said, “was just a nice way to pass time until we die.” 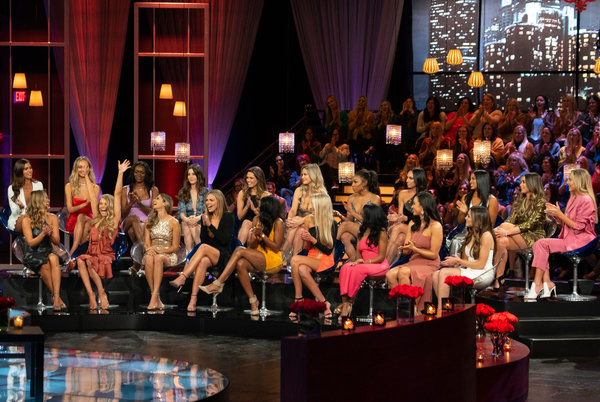 Looking for something to watch on Tuesday evening? Our picks for the day’s TV highlights include the season premiere of “The Story of God With Morgan Freeman” on National Geographic and “The Bachelor: The Women Tell All,” a two-hour special on ABC.