Sterling Ruby Pipes Down, a Bit

The Museum of Arts and Design and Sterling Ruby have worked out what might be called an equitable exchange of power. With the exhibition “Sterling Ruby: Ceramics,” the museum raises its game while the artist tones his down — a welcome step on both counts.

Once named the American Craft Museum, the Museum of Arts and Design remains craft-haunted, and not in a good way. It presents too much work that is pointlessly fussy, technique-obsessed and uncreative — no matter whether you parse it as art, design or craft. It needs to feature more artists who complicate, transcend or decimate these categories. At his best, Mr. Ruby accomplishes all of the above.

It’s gratifying to see the work of this Los Angeles artist in a relatively modest museum rather than more predictably at the Whitney or the Modern. He’s cooling his jets after a meteoric if bumpyrise during which he cycled across several mediums and through several blue-chip New York galleries in about seven years. Add on Mr. Ruby’s many collaborations with the designer Raf Simons culminating in projects for Calvin Klein, where Mr. Simons is now creative director, and you’ve got someone with ambition and talent to burn.

Meanwhile, back in the art world, he landed at Gagosian in 2014, which tried him out with shows in its Hong Kong and Paris galleries — as if he were on probation — before staging a large exhibition of paintings and ceramic sculptures last year in New York. While overcrowded, it was his best here in a while.

It’s also good to see Mr. Ruby showing only ceramics, his core medium, much as I like his spray paintings and his Schnabelesque textile works. He is simply at his most original and disruptive in ceramics, in terms of process, meaning and visual expectation. His efforts give you more to look at and think about than anything else he does. 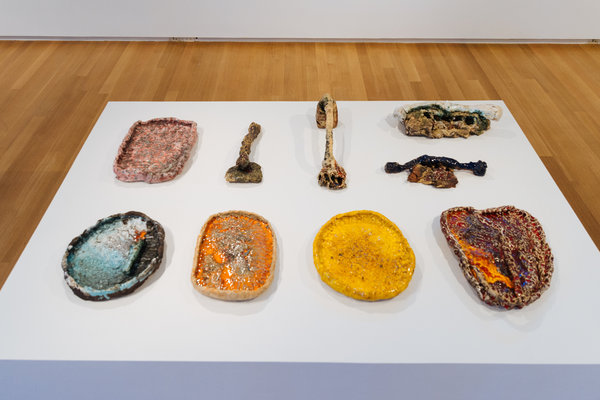 His often monumental and extravagantly glazed objects ricochet between extremes of beauty and ugliness. Some seem to have survived fires or vandalism; others suggest volcanoes about to erupt. They combine the scale of sculpture and chromatic richness of painting. But these works also drill into the history and processes of ceramics itself. They encompass loss, violence, the passage of time, the rise and fall of civilizations, the lavishness of ritual yet they’re also funny, indulgent and outrageous. And they’re life-enhancing, elaborating as they do on the most natural and widespread of all mediums. There is no culture in history that has not produced great ceramics.

The 21 works on view are from a somewhat larger show organized by and seen during the summer at the Des Moines Art Center in Iowa. They include the flat, plate-like pieces — which also conjure pizzas — of Mr. Ruby’s Ashtray series, and some wonderfully homely small pieces that are less interesting for being monochromatic.

But the show is dominated by outsize examples from Mr. Ruby’s Basin Theology series, which on first encounter resemble giant high-sided ashtrays, filled with the detritus, seemingly, of heavy smokers: pipe-like tubes protrude from most of them like cigarettes (or pestles to the basins/mortars or when vertical, like chimneys). These pipes are made by the artist using a small extruder, but being handled while newly formed, are usually less than perfect. Otherwise the pieces are built from slabs of clay and thoroughly exude signs of the artist’s hands — deep squeezes here, dragged fingers there and entire exteriors punched with thumbprints, like little waves.

The name Basin Theology implies a sphere ruled by a god, or gods. This seems appropriate to ceramics, the alchemical art of earth transformed by fire. It is an art prone to accident, especially during kiln firings. The detritus in Mr. Ruby’s basins turns out to be the products of such accidents; the chunks or scraps of broken or exploded pieces, however abject, are all cycled back into use; bricks fallen from the kiln are left where they land.

All this adds up to a sense of destruction, of nature’s cruelty but also of redemption, as well as a decidedly archaeological mien, like waste heaps that are always being picked through during excavations for the information they hold about past cultures. Even basins that seem to have survived the firing process intact have been repaired, indicated by mended cracks on all of them, or completely rebuilt, as with the dark brooding “Basin Theology/HATRA.”

“Basin Theology/STYX BOAT,” the show’s largest piece (almost four feet square), contains the halves of a broken pizza-plate originally glazed in turquoise and, more prominently, the jagged end of a smaller basin. This form looks like a couch or throne; the red and yellow glaze pooling on its seat is fitting, since crossing the River Styx takes you to Hades. Mr. Ruby frequently pools red glaze in the bottom of his basins as he tosses pieces of ruined vessels into them, creating the smooth, glassy illusions of liquid fire, reminding us that he returns these pieces to the kiln to give them new life.

Mr. Ruby comes from a long tradition of California ceramic artists that includes Peter Voulkos and Viola Frey, who both produced very large hand-built works — his were abstract, hers were figurative. Mr. Ruby’s objects are both; they hint at the historical forms and functionality of ceramics but refuse to satisfy their requirements. Founded on a love of improvisation, they have roots in Abstract Expressionist painting, Process Art sculpture and Neo-Expressionism.

Mr. Ruby’s constant improvising short-circuits ceramics’ chronological timeline: the formed and fired clay below, the applied and fired glaze, or glazes, above. His basins suggest a sense of multiple firings and glazings, a divine confusion no matter how hard you look. This sense of chaos is welcome in a medium that has so often been a model of measure and control. These works contain their own multitudes: gorgeous desolate landscapes, a sign of ecological end times. 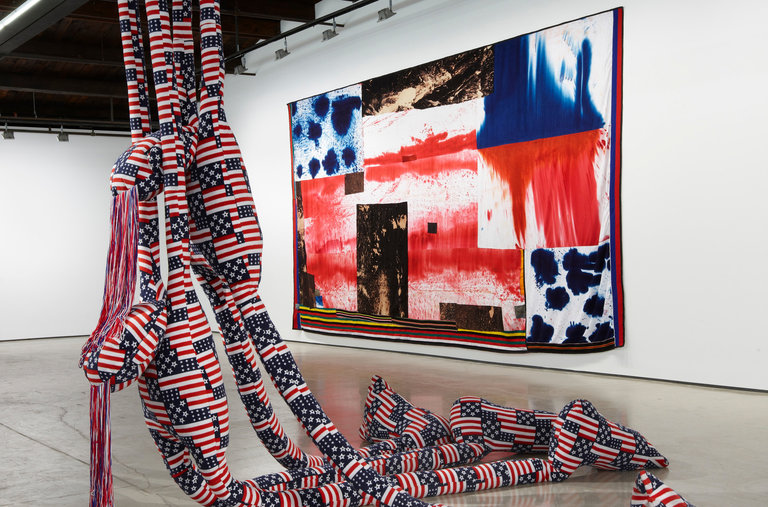