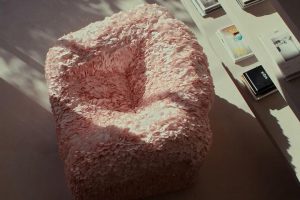 Andrés Reisinger, a self-defined “unclassifiable artist”, has chronicled the journey of his viral Hortensia chair in a new documentary, which tells the story of how it came to be, and how he transformed it from digital rendering into a real-life creation.

Reisinger debuted his Hortensia chair back in 2018, when he created a 3D rendering of a squishy seat that looked to be covered in a cloud of pink petals. Having uploaded the realistic CGI to his Instagram feed, the chair was picked up by design press the world over, and before long, followers were asking him to attempt to make it in real life.

Despite the Hortensia gaining a reputation as being the “chair that cannot be made”, Reisinger rose to the challenge and worked alongside fellow designer Jùlia Esqué to create a limited-edition version. To recreate the fluffy pink covering, inspired by the pale pink petals of hydrangea flowers, he developed a production processThis saw the pair use around 500 strips of laser-cut fabric, which were then clustered together and assembled into a form resembling the original chair. Later, Dutch brand Moooi released the chair to market, offering it in both the original pink and a light grey.

“Hortensia innovatively replicates the beauty of nature, whilst giving life to an experience enriched by both realms: digital and physical, a new future overwhelmed with possibilities and creative challenges.”

The documentary – directed by María Sosa and produced by Mañana – takes a rather abstract stance. Narrated by the Hortensia chair itself, the story about its own journey into physical existence is told, with viewers taken through its different stages. It goes further into Reisinger’s general creative practice and looks at how the chair differs in its physical and digital forms while interjecting some rather profound points about our own realities throughout.

Check out stills from the Hortensia above, and watch the documentary in full here. In other design news, skincare brand Haeckels has unveiled its first major rebrand alongside a new London store.
Source: Read Full Article