Summer House's Hannah Denies There Was 'Overlap' Between Luke and Des 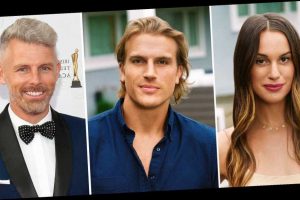 The drama doesn’t stop when the cast leaves the Summer House. Hannah Berner fired back at costar Carl Radke’s suggestion that there was “overlap” in her relationships with ex Luke Gulbranson and fiancé Des Bishop after she got engaged while season 5 is still airing.

During an exclusive interview with Us Weekly, the 29-year-old comedian responded to comments Carl, 36, made during a recent chat with Access, in which he said, “I think we were just as surprised as everybody else. There’s definitely some interesting overlap that I would have been burned at the cross for. But she’s happy and that’s all that matters.”

Hannah called the comment “very hurtful” during a joint interview with Des, 45.

The twosome, who met each other in July 2020, got engaged on Valentine’s Day but didn’t announce the news until earlier this month.

“It’s weird for it to happen while the season is airing ‘cause the season happened already. And I definitely get in past emotions of getting angry, upset, but then I’m like, ‘I just got engaged and let’s live in the present moment!’” Hannah told Us.

Des added, “It was way more fun after we’re able to say it properly publicly, you know? ‘Cause we were trying to keep it on the down-low, which you ended up not telling as many of your own personal friends. So, once it was out there, then you hear from everybody and it got really fun.”

While some fans may be confused by the timeline of their romance, Hannah and Des told Us that they weren’t serious when she entered the Hamptons home during the summer.

“We literally met just before she went into the summer house. Our relationship didn’t, like, begin until the FaceTimes got more serious as the time went on in the house. Initially, it was just a hookup before she went in,” he said.

‘Summer House’ Season 5: Everything We Know

Hannah added that their relationship has been “unorthodox,” but they are confident they found they both found The One.

“Early on, he was like, ‘I’m going to marry you.’ So, my head, I was like, ‘Then put your money where your mouth is.’ And I started sending them links to rings,” she said. “And he joked back and he goes, ‘OK on it.’ And I was like, ‘I think this is a comedy bit, but I’m gonna go with it.’ And then when he proposed, I started crying. I go, ‘Are you joking?’ I thought the whole thing was a joke.”

Fans will see Des make a cameo on an upcoming episode of the Bravo show. When asked whether he plans to be on the show more in the future, he replied, “That’s really up to Hannah. And then obviously it’s up to Bravo. I’ve been doing comedy since 1997. I never saw myself being on a Bravo. I usually make documentaries about learning Chinese and about minimum wage, so it would be a departure for me.”