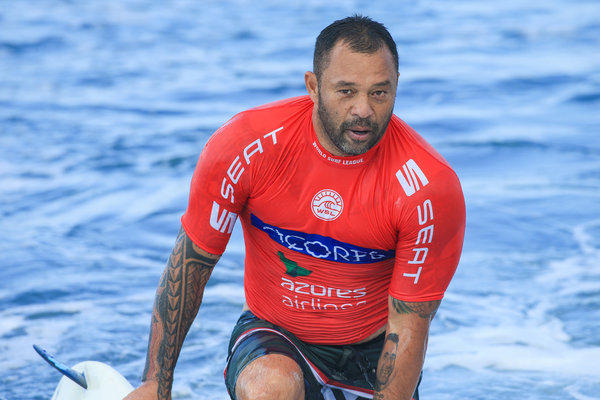 Vincent “Sunny” Garcia, a legend in the surf community and the 2000 ASP World Champion, has been hospitalized after an attempted suicide, the World Surf League confirmed Tuesday. He remains in the intensive care unit.

The news, which rocked the tight-knit world of surfing and sparked an outpouring of empathy on social media, was confirmed by the World Surf League over Twitter. The league declined to comment further.

With heavy hearts we confirm that Sunny Garcia is in the ICU in the hospital. Sunny has always been a great champion of surfing, both in and out of the water. Our prayers are with him and his loved ones at this deeply challenging time. pic.twitter.com/re0F3l9toI

The 49-year-old surfer is known as a relentless competitor with a fierce surfing style that led to six Triple Crown champion titles and a World Championship title in 2000.

Garcia grew up on the West Side of the Hawaiian island of Oahu, whose famed North Shore, with its massive waves, is to surfing what Churchill Downs and the Kentucky Derby are to horse racing. He dropped out of high school at age 16 to begin surfing professionally. He rose through the ranks quickly, and was in the top echelon of professional surfers throughout the 1990s, finishing in the top 10 for 10 consecutive years. He became the second surfer in history to win more than $1 million dollars in prize money.

But Garcia has long been known for having a darker side. In 2014 he began discussing his own mental health struggles. He shared a post on Instagram with the caption “Depression is no joke … I’m not alone and I’m not sure what’s wrong with me because I have no reason to feel the way I do.”

In the caption, he also asked for help. “… it’s been happening for about two years and would love to hear from any of you who suffer these feelings so I can figure out what I should do.”

He was overwhelmed with hundreds of responses, online and in person.

“For me to reach out and ask for help was really hard,” he said in a 2015 interview with the Honolulu Star-Advertiser. “Fortunately for me I have really good people around me to help me out.”

That reaction came long after he had became known as a powerful surfer whose power in the water could be matched by his intensity on land. Opinionated and outspoken, he occasionally got into trouble for scuffling with a competitor or hurling rocks, sand and even a muffin at judges and surf officials. He served three months in prison for federal tax fraud in 2006 and in 2011 was suspended from a contest after being involved in a physical altercation.

Throughout the turmoil the ocean remained his sanctuary — where he first went to escape a childhood of poverty and trouble in school.

He became a mentor to many in the surfing community and an icon of the sport. Garcia was inducted into the Surfing Walk of Fame in 2010 and the Hawaii Sports Hall of Fame in 2015.

He was a big brother figure to surfer Andy Irons, a three-time world champion and another Hawaiian surfer known for occasionally erratic behavior. Irons died of a heart attack in 2010. Toxicology tests revealed a cocktail of drugs, including cocaine and methamphetamine, in his system. His family confirmed that he had been diagnosed with bipolar disorder at age 18.

“I was like his older brother, but I didn’t really know or understand what he was dealing with,” Garcia said of Irons in an interview years later. “If I knew then what I know now, I would have told him to get more help, professional help. Your friends and your family can only help you so much. I don’t want to be a tough guy anymore. There’s nothing weak about being open.”

That same community rallied around Garcia today as news spread that he was in critical condition in a Portland area hospital.

“We’ve got so much more living to do before we are done,” 11-time world champion Kelly Slater wrote on Instagram, sharing a photo of the two surfing mavericks. “There’s been hard times but there have been so many good ones, too. Just praying you wake up and we get more of you.

Jeremy Flores, a professional surfer from France, shared a photo of the two, writing “Come on brother we need you here! It’s not your time yet.”

On Sunday, Garcia posted an Instagram photo of himself as a teen holding a shave ice. “If I told this kid the things he would go through and things he would achieve he would tell me I’m crazy … it’s been a crazy ride since this photo was taken,” he wrote.

If you are having thoughts of suicide, call the National Suicide Prevention Lifeline at 1-800-273-8255 (TALK) or go to SpeakingOfSuicide.com/resources for a list of additional resources.