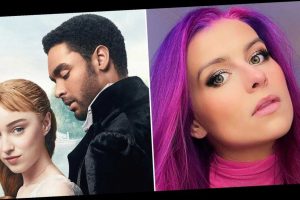 Broadway is calling! Binge-watching Bridgerton inspired TikTok user Abigail Barlow to write music for an original musical based on the Netflix hit — and fans can’t get enough.

‘Bridgerton’ Season 2: Everything We Know So Far

“Ok but what if Bridgerton was a musical?” the social media personality teased in a post earlier this month alongside a snippet of music from “Daphne’s Song,” based on the romance between Daphne Bridgerton (Phoebe Dynevor) and Simon Basset (Regé-Jean Page). In the clip, Barlow sings, “I can’t even drink champagne / Without seeing your face / Am I the one to blame? / When we’re dancing in the same room / but you’re an ocean away.”

Her first video quickly went viral and fans of the Netflix drama begged for more songs inspired by the Regenecy-era romance. Barlow followed up with five other songs telling stories from the perspectives of several of the show’s main characters, including Eloise Bridgerton (Claudia Jessie) and Penelope Featherington (Nicola Coughlan).

Bridgerton made a huge impact after its Christmas Day debut, reaching 63 million households and becoming the fifth largest Netflix original series launch of all time. The series follows Daphne, the eldest Bridgerton daughter, who is eager to find a worthy husband within the strict confines of 19th-century high society. She cooks up a plan with Simon to help attract more eligible suitors — but their feelings for each other soon get in the way of their rouse.

A Complete Guide to TikTok: The Most Followed, the Feuds and More

The chemistry between Dynevor, 25, and Page, 31, was so convincing that viewers began to wonder whether the actors had sparked a romantic connection offscreen. However, the For the People alum played coy when asked about the status of his relationship with his costar.

“I think that everything you need to know is on camera,” he teased during an interview with Access Hollywood earlier this month, highlighting the strength of the show’s “beautiful scripts.”

Though the pair might not be anything more than friends, they grew incredibly close while working on the Shondaland series and still have a strong bond. “Unfortunately now he’s off in Los Angeles, but we check in with each other a lot,” Dynevor told The Guardian on Saturday, January 16, noting that Bridgerton‘s success has been “a big moment” for them both. “We spent so much time rehearsing together that we’ve become good mates.”

Dynevor and Page’s characters have a love story for the ages — and provide plenty of inspiration for Barlow’s TikTok musical. Bridgerton isn’t the only piece of pop culture that’s received the Broadway treatment amid the coronavirus pandemic. Earlier this month, Broadway favorites — including Andrew Barth Feldman, Ashley Park, Titus Burgess and André De Shields — joined forces to stage a virtual Ratatouille musical after TikTok creators composed their own songs based on the Disney film. The digital event raised $1.9 million for The Actors Fund to help those who have been hit hardest by the ongoing COVID-19 crisis.