Home » Entertainment » T Suggests: A Store With a Mushroom Garden, a New Detroit Hotel and More

T Suggests: A Store With a Mushroom Garden, a New Detroit Hotel and More 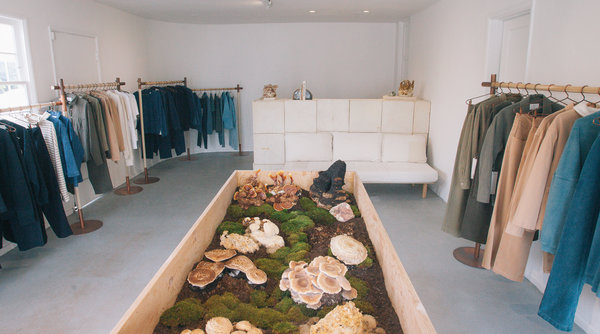 A Very Venice Store for Eco-Friendly Clothes — and Chaga

Since they launched their unisex clothing brand, Olderbrother, in Portland, Ore., four years ago, the designers Bobby Bonaparte and Max Kingery had hoped to open a retail space. It’s rarely an easy rite of passage — and perhaps made more complicated when an elaborate display of mushrooms is among the desired amenities. Fungi aren’t typically the province of fashion designers, but Bonaparte and Kingery create their garments with natural textiles and dyes, and for fall 2018, they made boxy plaid button-downs and roomy corduroy pants from organic Japanese cotton colored with chaga mushrooms. “We saw a store as a portal to bring people into what we’re doing,” Bonaparte explains. “It’s kind of like the idea behind a farm-to-table restaurant, using each seasonal concept as a way to re-envision the shop and tell a new story.”

Last month, following a search for a location on both coasts, the first Olderbrother store officially opened inside a 1940s bungalow on Venice Beach in Los Angeles. The mushroom garden, fully realized, is unmissable, positioned in the center of the room, while clothing racks filled with the brand’s eco-friendly basics run along the perimeter. Chunks of chaga sourced from the Adirondacks sit atop shelves like abstract sculpture and even the tiles covering the service counter are crafted from mushrooms. The designers also assembled a stack of books that keep with the theme, from a Tintin comic in which the titular hero visits a Chinese healer to technical Russian foraging guides. “Brick-and-mortar retail is giving us another type of meaningful experience with our customers,” Kingery says, noting that until this point their business has been mainly online. He and Bonaparte now jokingly refer to the store as “the shroom shack” — an apt name, really, until springtime, when their saffron-dyed range moves in. 566 Rose Avenue, Venice, Calif., olderbrother.us. — HILARY MOSS

Here’s yet another reason to visit Detroit next year: the debut of a major hotel project from Shinola, the Michigan-based luxury goods company whose headquarters are about three miles south. The property, designed by Shinola, along with the firms Gachot Studios and Kraemer Design Group, is on the city’s historic Woodward Avenue and encompasses a duo of restored buildings — the brick-fronted, 1915 former T.B. Rayl Co. department store and a former Singer sewing-machine factory. The 129 guest rooms reflect the brand’s Americana aesthetic, outfitted with Shinola clocks and turntables (a nod to Detroit’s music heritage), striped alpaca blankets, leather throw pillows, custom-made candles and bathroom fixtures that resemble watch case backs.

But Shinola — and its several, mostly local, collaborators in the project — hopes to make the hotel a hangout for the entire city. The food and beverage operation is led by the chef Andrew Carmellini, of New York City’s Locanda Verde and the Dutch, and will include an outdoor beer hall, a cocktail lounge and a fried chicken spot, Penny Red’s. There’s also San Morello: a Southern Italian restaurant serving wood-fired pizza and homemade pastas made with ingredients sourced from nearby Michigan farms. It will welcome its first diners next week, ahead of the hotel’s official opening on January 2. shinolahotel.com — JOHN WOGAN

Growing your first beard is often an exciting right of passage into adulthood. But for men of color, that excitement is frequently tempered by pain and insecurity thanks to an accompanying smattering of razor bumps, acne scarring and subsequent hyperpigmentation. Among the seemingly thousands of skin-care products on the market, there were none that specifically addressed these issues until Ceylon, which launched in the fall. Created by the friends Patrick Boateng and Blake Rascoe, who met at Morehouse College, Ceylon is the first dermatologically focused skin-care brand developed with men of color in mind.

The initial set of skin-care essentials — formulated with the assistance of the Washington, D.C.-based dermatologist Dr. Lynn Mckinley-Grant, who has over 30 years of experience — comprises a noncomedogenic face wash, a hydrating toner and a moisturizer that uses alpha-hydroxy acids (AHAs), which have been shown to help with hyperpigmentation and skin turnover. The lotion’s hydrating formula is designed to avoid the dryness and skin bleaching that many people of color experience when using mainstream products. Boateng and Rascoe emphasize that while improving skin care is one of their current goals, it isn’t their only one. “We’re seeking to open the door to better skin health and self-care for our community,” says Boateng, with “Ceylon serving as a potential gateway to better health outcomes for people like us.” ceylon.com — ABID HAQUE

The Israeli choreographer Noa Eshkol, who was born in a kibbutz in Palestine in 1924, is well known — in the dance world, at least — for cofounding the Eshkol-Wachman Movement Notation, a language of symbols that describe and document the movements of the human body. But, lesser known is that, starting in the early ’70s, Eshkol (who was also the daughter of Israel’s third prime minister, Levi Eshkol) made what she called “wall carpets,” joyful textile collages and abstract quilts that she sewed with the help of her dancers out of discarded fabric. She compared the process to “action painting.” There was only one guiding principle: that no material should be cut or purchased.

These pieces were first championed by the American artist Sharon Lockhart, who discovered the textile works in Eshkol’s archive in Holon, Israel — where Eshkol lived until her death in 2007 — on a research trip to the country in 2008. Lockhart immediately called her gallerists, Tim Neuger and Burkhard Riemschneider, of the respected Berlin-based gallery Neugerriemschneider, who are credited with giving some of today’s most celebrated artists, such as Rirkrit Tiravanija and Olafur Eliasson, their earliest solo shows.

“They are extraordinary,” said Neuger, referring to the wall carpets, “like rhythmic visions of dances themselves. It seems each textile offcut or hand-me-down has been choreographed into its place in the composition.” Lockhart used Eshkol’s body of work as a jumping-off point for an installation of video pieces and photographs titled “Sharon Lockhart | Noa Eshkol,” which traveled to various galleries and museums (including the Jewish Museum in New York and the Los Angeles County Museum of Art) from 2011 to 2012. Since then, Eshkol’s wall carpets have been infrequently shown, but as of today, an exhibition of a dozen of the pieces — including “Window to the Garden With Birds,” a four-meter-long work of birdlike figures, throbbing with color — will be on view at Neugerriemschneider until mid-January. Linienstrasse 155, 10115 Berlin, Germany, neugerriemschneider.com. — GISELA WILLIAMS

A Beauty Brand That Supports Bees

Over the last year, I have slowly switched to using clean beauty products. How hard could it be to live without sulfates, anyway? The up-and-coming beauty label Esker recently caught my eye with its tasteful packaging, and it has become a mainstay on my bathroom shelf. Created in Los Angeles by the California native Shannon Davenport, who worked as a trend forecaster and became a certified aromatherapist, Esker is a thoughtful brand and not too overwhelming for newer acolytes of the clean beauty world. Davenport offers three kinds of essential oils — all of which are vegan as well as paraben and sulfate free — that can either clarify, restore or firm. I’ve become a fan of the restorative oil, which contains notes of frankincense, bergamot, rosemary and ylang-ylang flower. There is also a matching body wash. Best of all, Esker products come with a small package of wildflower seeds, which Davenport encourages you to plant in your yard or flower box to help attract bees, who, as nature’s pollinators, are under threat from habitat loss, urban sprawl and global warming. eskerbeauty.com — THESSALY LA FORCE