Taco Bell Enters the "Chicken Wars" with a New 2021 Offering 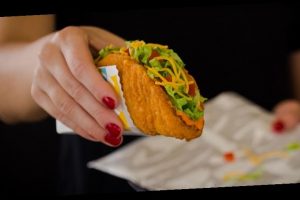 Today, Taco Bell‘s global chief food innovation officer Liz Matthews told Business Insider that Taco Bell customers should expect to see substantial changes to its menu in 2021, including a mystery chicken-forward option. The company also announced the return of the “Cheesy Fiesta Potatoes” and the “Spicy Potato Soft Taco” in March as well as a partnership with Beyond Meat.

Taco Bell has previously experimented with chicken-based menu options like “Naked Chicken Chips” and “Naked Chicken Chalupa” (pictured above), which has since become a recurring limited menu offering since its advent in 2017.

“I love watching the competitors,” Matthews told Business Insider. “I think a lot of players out there are doing a great job, but what I will say is that we will interrupt that with what we’re going to do on chicken.”

If you’re new to the “chicken wars,” Burger King, McDonalds, KFC, Popeyes and now Taco Bell have been clamoring to become the biggest, and most profitable, name in the (chicken) business.

You can trace the poultry push to Popeyes’ infamous 2019 chicken sandwich, built to rival Chick-fil-a‘s flagship option. And the sandwich has continued to bring customers through its doors; in October, Popeyes reported a 21.5 percent increase in sales in the most recent quarter and José Cil said the sandwich has been “the largest single driver of sales growth,” according to Business Insider.

The popularity of the Popeyes’ offering spurred innovation across the industry, which looks to be coming to a head this year. McDonalds revealed that three new chicken sandwiches are set to launch in February; KFC announced its chicken sandwich will debut in March; Burger King, fresh off a rebrand, will launch a new chicken sandwich in March or April which it expects to be “the biggest sales driver this year,” per Business Insider.
Source: Read Full Article