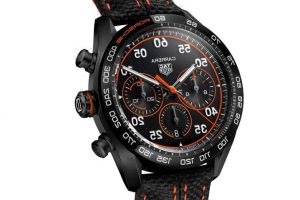 TAG Heuer has partnered with Porsche for a watch that pays tribute to the world of racing. The sporty timepiece is called the TAG Heuer Carrera x Porsche Orange Racing, or simply the Carrera, deriving its name from the automaker’s iconic sports car.

The Swiss watchmaker has strong roots in racing culture and heritage, having been the watch of choice among professional racecar drivers beginning in the 1950s. In 1963, Jack Heuer was inspired to call his latest chronograph the Carrera after hearing a story about Porsche’s victory at the Carrera Panamericana race nearly a decade earlier.

With TAG Heuer and Porsche both boasting products with the Carrera name, the two companies thought it would be fitting to integrate their timeless aesthetics. Similar to the evolution of the car over the decades, the chronograph intertwines contemporary elements with a classic design. The watch takes on a sleek black colorway using a diamond-like carbon with flashes of orange throughout, including on the bezel, crown and on dial. Orange stitching across the strap is reminiscent of the distinct marks of a racing track.

Consisting of 168 parts in total and packing a power reserve of 80 hours, the Carrera was entirely manufactured in TAG Heuer’s Chevenez facility. A key feature of the Carrera is a special oscillating weight inspired by Porsche’s steering wheel, balancing the watch in conjunction with its wearer’s movement.