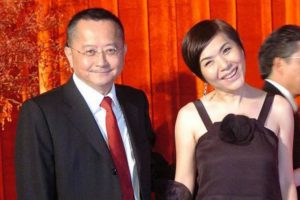 Her marriage has always been seen as blissful and their relationship looked strong even in May when it was reported that he had bought a NT$200 million (S$9.5 million) mansion in Taipei for her.

In a joint statement, they said: “We have decided to divorce as we could not overcome the differences between both parties. We are unable to resolve the issues even though we have tried, so we agreed to a divorce last year. We have chosen to complete the legal process when the children are on summer vacation this year.”

The statement continued: “Although we will not be husband and wife in the future, we are still the parents of our children. The children will not lose the love of either party due to our divorce.”

Chang and Mr Sung asked for people to not speculate on the reasons for their divorce as it would hurt their children and also to not harass their families and friends.

She held a concert tour in Singapore, Taipei and Kaohsiung in late 2015 and early 2016, with her husband reportedly agreeing after they had a long discussion.

Chang was a force to be reckoned with in the Chinese music industry in the 1990s, with hits such as Married, I’m Still Young and Men’s Talk. She was described as one of the four divas in the 1990s together with Sandy Lam, A-mei and Faye Wong.

Chang has released more than 30 albums and earned two Best Female Vocalist nods at the Golden Melody Awards, in 1994 and 1997.

Taiwanese television host Chang Hsiao-yen, who was the matchmaker for Stella Chang and Mr Sung, declined to comment on the split to the Taiwanese media.

Stella Chang’s good friend Issac Chen, who is helping to manage her affairs, said she has no plans to return to singing for now.