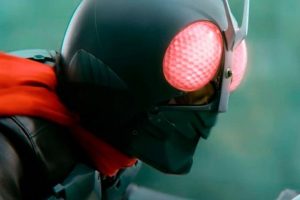 Announced as part of the 50th-anniversary celebrations for the Kamen Rider series, we now have a first look at Hideaki Anno‘s Shin Kamen Rider. Set to release in 2023, the reboot of the original 1971 Kamen Rider series continues the Evangelion creator’s “Shin Trilogy,” following 2016’s Shin Godzilla and the soon-to-be-released Shin Ultraman.

The first look comes in the form of a duo of teaser trailers and the announcement of Sosuke Ikematsu to star as protagonist Takeshi Hongo/The First and Minami Hamabe role as Ruriko Midorikawa. The teaser trailers serve as recreations of the opening sequence from the original 1971 series with in-depth looks at the redesigned Cyclone motorcycle and look of Kamen Rider, The First.

Following the story of the source material, Shin Kamen Rider will chronicle the story of college student and motorcycle enthusiast Takeshi Hongo, who is abducted by the evil organization Shocker. Despite being transformed into a cyborg in their plans for world domination, Hongo escapes before he can be brainwashed, using his newfound powers to bring down Shocker as Kamen Rider, The First.

Catch the first look at Hideaki Anno’s Shin Kamen Rider above and below.