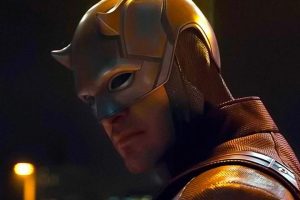 Officially announced at SDCC 2022 back in July, alongside a host of announcements at Disney‘s recent D23 Expo, Marvel Studios‘ offered a short film highlighting upcoming developments in the Marvel Cinematic Universe. Included in the clip was a first look at the new logo for Daredevil: Born Again.

Building on the title card unveiled back in July, the new look reveals Daredevil’s new motif. The logo is set to be part of The Man Without Fear’s MCU costume and builds on the comic book look of the hero. The logo shows an encircled overlapping “D” motif representing the words “Dare” and “Devil.”

Building up anticipation for the MCU debut of Daredevil, the hero already showed up in Spider-Man: No Way Home and will appear in She-Hulk: Attorney at Law. The build-up is leading fans to believe that Daredevil will play a major part in the development of Phases 5 and 6 of the MCU.