Home » Take a Look Inside the New Olympic Museum in Athens

Take a Look Inside the New Olympic Museum in Athens 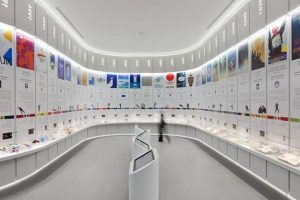 Initially slated to open in 2020 before the coronavirus pandemic outbreak, the Olympic Museum in Athens is now officially open to the public. The museum is situated in the heart of the Golden Hall in the Maroussi district andnear the Olympic Park complex where many of 2004 Olympics activities took place.

The Olympic Museum spans 3,500 square meters and features an inaugural exhibition that looks into the rich history of the Olympic Games. One the of the presentations highlights the earliest games known to mankind, shedding light on Ancient Olympia which has been billed the cradle of the Olympics.

Plenty of sports memorabilia — from countries all across the globe who have participated in the previous installments — are also on display including equipment, Olympic flags, medals and torches. The exhibition rooms also feature nine-meter high walls filled with posters and information from each opening ceremony of the games. The space was designed by local architecture firm KLab and Mulo Creative Lab.

“We had infinite sources of inspiration for the overall composition,” KLab director Konstantinos Labrinopoulos said in a statement. “We had many objects to work with, supported by other museums and cultural bodies.”

Head to the official Olympics website for more information and check out installation views in the slideshow above.

Elsewhere in art, check out the some of the highest-selling artworks at the recent Frieze New York 2021 fair.