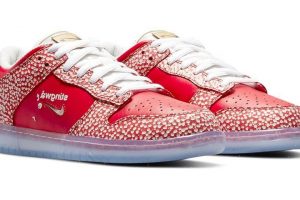 Following early imagery that surfaced last month, we now have an official look at the Stingwater x

Daniel Kim’s streetwear imprint’s take on the Nike Skateboarding staple is centered around a contrast-based “Magic Mushroom” print. The bright leather upper of the shoe is accented by overlays of the pattern that introduces the hits of white found throughout. Additional detailing comes in the form of jeweled midfoot Swooshes that underscore falling “Stingwater” embroidery, reversed “EKIN” embroidered at the rear, corduroy lining, “VERY SPESIAL” marked tongue tags and printed insoles. The shoes also feature a hidden zip pocket marked by a playful stitched-on mushroom tag. Finally, elevating the shoe is an icy sole unit that obscures “PLANET EMOJI” and “WITH EYES” text found underneath.