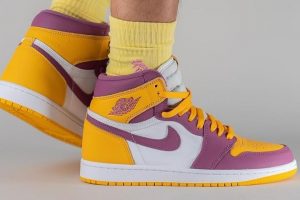 After receiving some early imagery, we now have an on-foot look at the Air Jordan 1 High OG “Brotherhood.” Centered around a mix of “University Gold/Light Bordeaux/White,” the shoe serves as an homage to Michael Jordan’s fraternity, Omega Psi Phi. A major part of MJ’s life during his time at the University of North Carolina, the brotherhood founded in 1911 stands as the first fraternal organization founded at a historically black university.

The Air Jordan 1 High OG “Brotherhood” features a premium white leather base accented by gold and purple overlays. Additional detailing comes in the form of white nylon tongues, midfoot Swooshes, Wings motifs at the collar and printed insoles. Rounding up the design of the shoe are white midsoles paired with yellow rubber outsoles.