TOLEDO, Ohio — The American automobile and the Toledo Museum of Art were born only a few years apart. Now the museum is about to present a major show that examines the car’s impact on American life during the 20th century and beyond.

“Life Is a Highway: Art and American Car Culture” is set to open June 15 and run through Sept. 15. It will feature works including photographs and graphic arts, paintings, sculptures and other objects.

A quarter of the works are coming from the collection of the museum, which was established in 1901, only a few years after Henry Ford test-drove his first automobile on the streets of Detroit, 60 miles north of Toledo.

But Toledo, on Lake Erie just across the Ohio-Michigan border, has had its own connection with the industry for nearly all that time. It is home to the big Jeep plant run by Fiat Chrysler, on a site where vehicles have been produced since 1910. General Motors has built transmissions here since 1916, and the city is home to, and surrounded by, scores of smaller parts plants.

However, the museum itself owes its existence to an industry that was around before cars: glass. Its benefactors were Edward Drummond Libbey and Florence Scott Libbey, members of the family that founded what was to become the Libbey Glass Company in 1818.

Portraits of the museum’s founders hang everywhere in the sprawling main museum building, while a separate building devoted to glass is across the street. In all, there are more than 30,000 works of art, a third of them paintings, a third works on paper, and a third glass objects.

The 40-acre museum campus sits on Monroe Street, surrounded by large, gracious homes and apartment buildings — and the constant rush of traffic.

This prevailing influence of cars in every aspect of American life was a reason the show’s curator, Robin Reisenfeld, wanted to mount the exhibition. 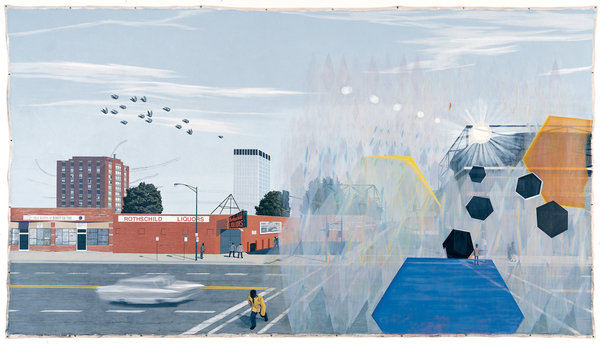 Ms. Reisenfeld, previously course director for global and contemporary art at Christie’s Education and an associate curator at the Museum of Modern Art, joined the Toledo museum in 2016 as its curator for works on paper.

She arrived in Toledo early that year as the North American International Auto Show was underway in Detroit, which she says put cars on her radar.

As she got her bearings in her new position, “I realized how different automotive culture translated here, as opposed to other parts of the country, such as the West Coast,” she said.

Ms. Reisenfeld said she began thinking about the transformations taking place in Detroit as well as in the automobile industry, which is facing a future in which cars have to compete with other forms of transportation to capture consumers’ attention.

Rather than focus on vehicles themselves, Ms. Reisenfeld said she wanted to depict the overall concept of “automobility,” meaning the relationship of cars to everything they touch.

“My hope is that (the show) offers an expansive view of automobility and the United States,” she said.

The Toledo show will be sizable, with 125 works. (By comparison, many major shows have about 80 works, Ms. Reisenfeld said.)

Laid out along a road theme, the show sketches out three major cultural shifts that Ms. Reisenfeld says have been brought about by cars.

The first is the period before World War II, when cars first became part of American culture. The second is the boom that followed the war, with the building of the Interstate System and the expansion of suburbs, and the third is the rise of consumer culture related to automobiles.

“The automobile becomes identified as a symbol of empowerment, and success and individuality,” Ms. Reisenfeld said.

Along with pieces in Toledo’s collection, Ms. Reisenfeld has secured loans from 47 other institutions and collectors, including the J. Paul Getty Museum in Los Angeles, the Museum of Contemporary Art in Chicago, the Cleveland Museum of Art and the Detroit Institute of Arts.

The show will include vintage photographs from Dorothea Lange and Gordon Parks, and newer works by Edward Burtynsky and Helen Levitt. Graphic artists will include Andy Warhol, Robert Indiana and Jim Dine, while painters include Thomas Hart Benton and Kerry James Marshall.

Pieces derived from vehicles will be part of the show, such as a George Segal installation, “The Red Light,” which features a truck’s front end, and a car hood by the sculptor Richard Price. But there are no plans for rolling art inside, although cars could be part of events in association with the show.

Mr. Kennedy said there are numerous places in the Midwest and around the country to see classic cars. “You can go to the Petersen Automotive Museum in Los Angeles, and it’s extraordinary. You can go up to Dearborn,” home to the Henry Ford museum, which has a variety of historic cars.

But those places, he said, “are just about cars. What about car culture?”

The Toledo show’s automobility theme, he said, is about more than putting down the top of a convertible and feeling the sun.

“This was a utility,” he said. “It got people around and got them on vacation. It got them to work. It got things to work,” he said, referring to the economy.

Though Mr. Kennedy said he didn’t know how many people would attend the show, he did know that the Toledo museum has had some impressive attendance numbers. In the past four years, the museum, which does not charge admission, has averaged 411,000 visits annually, in a city of 276,000 and a metropolitan area of 600,000. That makes it the second-most visited museum per capita in the country, after the National Gallery of Art in Washington, he said.

If the museum were mounting a car show, it might be able to compare itself with other museums that have put automobiles on display.

But “Life Is a Highway” is going down a road that offers little guidance, Mr. Kennedy said. “This is about the way we’ve used cars.”