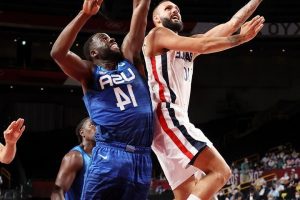 As the Tokyo Olympics has officially begun, Team USA’s men’s basketball team came out with a shocking 76-83 loss at the hands of France last Sunday. Citizens are having a social media field day about the All-Star packed lineup.

This is the first time Team USA has lost its first Olympic game since the 2004 semifinals against Argentina. France was also the same team that got America eliminated in the 2019 FIBA World Cup quarterfinals.

Although Team USA led by eight points at halftime, France came back with a 25-11 advantage by the third quarter and led with six points during the fourth. France connected on 47 percent of its attempts, while America only shot 36 percent from the field. NBA Defensive Player of the Year Rudy Gobert along with Boston Celtics’ Evan Fournier took the reigns for France as Gobert led the team to out-rebound America with 42-36 and Fournier led with 28 points in the game.

A lot of concerns have been raised after the surprising loss ranging from the team’s shooting percentage to leadership under head coach Gregg Popovich as he stepped in for Mike Krzyzewski who led Team USA to three consecutive gold medals.

Team USA is set to face Iran and the Czech Republic within the next few days in order to advance to the quarterfinals.