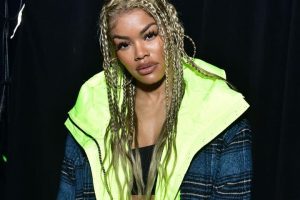 Kanye West signed singer-songwriter Teyana Taylor to his record label, G.O.O.D Music, in 2012 while she was in the midst of production on his album “My Beautiful Dark Twisted Fantasy” — and though she was able to release three albums throughout the duration of her contract, Taylor says she felt the label “underappreciated” her music.

Six months after dropping her third album, “The Album,” in June 2020, Taylor put a full-stop to her music career with the announcement of her retirement from the industry at only 30 years old. On the April 28 episode of NFL quarterback Cam Newton‘s Sip N’ Smoke web series, Taylor expounded on that decision, stating that her departure from music was partly due to the fact that she didn’t feel seen by her label.

“I am going to feel underappreciated if I’m putting in 110 percent and my label is giving me … what, 10 percent of that,” she said to Newton.

“I put in a lot of work [and] I felt like the label wasn’t really hearing me and [seeing] me. I feel underappreciated. It’s not that I retired permanently, it’s more like, I don’t want to move another inch for a company.”

Taylor’s comments on the web series reiterate the sentiment she shared when she first announced that she was quitting music on Instagram. “I’m retiring this chapter of my story with the comfort that I can depart with peace of mind seeing that all the hard work and passion put in was indeed loved and supported somewhere in the world,” she wrote under an image of her 2020 Spotify Wrapped. “I ain’t gone front [I’m] feeling super underappreciated as an artist, receiving little to no real push from the ‘machine,’ constantly getting the shorter end of the stick, being overlooked.”