The 100-Pound Fruit That Vegans Love 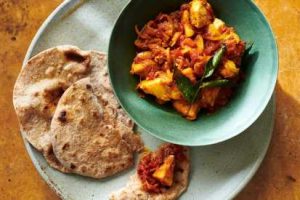 Romy Gill didn’t work with canned jackfruit until she started research for her cookbook, “Zaika: Vegan Recipes From India.” Gill, a chef who was raised in Burnpur, West Bengal, had never really needed to: The fruit grew wild around her home, along with pomegranates, mangoes and guava. Fresh jackfruits look like gigantic, scaly lumps — a family of dragons asleep in the branches. A single fruit can reach 100 pounds, and even the small ones tend to be heavy and unwieldy. “It’s very tough when you cut it down fresh; it’s a lot of work,” she says. Every time Gill’s mother and her friends picked one, they cut it up and shared the fruit among themselves, working together, leaving the rest to keep ripening on the tree.

Ripe jackfruit has some sweetness and a powerful smell. Fans love its intense, tropical, pineapple-like flavor. But unripe, the fruit is far more vegetal and almost plain, which can make it seem as if it’s shaping itself to suit your dish, adapting itself continuously to your needs in the kitchen. Though the tree is native to Southeast Asia, in the last few years jackfruit has become popular in the United States as a vegan alternative to al pastor, pulled pork and other meaty dishes, making the most of its yielding but structured texture. Gill sees the appeal, but she never thought of the jackfruit as a replacement for anything else. Jackfruit was its own pleasure, with its own attributes and its own set of recipes. Gill’s mother and her friends would use the unripe fruit to make achaar — different kinds of hot, oily pickles. They dried pieces of it on cloth in the sunshine, preserving it for the off-seasons to rehydrate in curries with fish. Together, they taught one another their techniques and shared meals.

Jackfruit was its own pleasure, with its own attributes and its own set of recipes.

Gill’s father worked at a local steel plant, and the workers came from as far as Gujarat and Rajasthan, Andra Pradhesh and Kashmir — the close-knit colleagues were multicultural, and so were their foods. Gill’s mother was Punjabi, and at home, she made vegan dishes alongside meat and fish, from gram-flour pancakes and papaya parathas to fried okra with chaat masala. “Our Punjabi food at home was very lentil- and vegetable-based, but we ate everything,” Gill says. “When there was a celebration — say, my birthday, or a friend coming over — we would have meat or fish, but when it wasn’t there, I didn’t miss it.” Gill’s mother often sautéed jackfruit with onions and tomatoes to make a simple vegetable dish as part of a quick dinner. This meal is one of many of the family’s favorite dishes lovingly recorded in Gill’s cookbook: a jackfruit sabzi seasoned with a few spices and amchur, or unripe-mango powder, to give it depth and tang.

With canned jackfruit, the recipe is fast — it comes together in about 20 minutes — but still, its deliciousness can’t be rushed. When the oil is hot, it’s important to wait for the mustard seeds to sputter and pop so they can release their flavor. Be patient with the onions too, so they can color evenly and lightly, lending sweetness to the unripe jackfruit. And once the tomatoes and spices are in the pan, give it all time to properly reduce into a thick, concentrated sauce that clings to the jackfruit and fills its ridges. The dish is just as delicious as when it’s made with fresh fruit, and with a little dal and rice or just a couple of roti on the side, it’s a whole meal. Gill likes to make the sabzi for her daughters and swaddle it inside warm pita, or another tender bread, to make thick, satisfying wraps.

But she remembers how in Burnpur her mother cut the fruit open carefully — its white, sticky sap was such a nuisance. Like many cooks, she used oiled knife blades and covered her work surface with newspaper. She cut the fruit into quarters, or big pieces, then removed the skin and boiled the fruit until it was less tannic and more tender. So much unseen work went into the simple dish. “When it’s canned, you just drain the brine, pull the jackfruit chunks and it’s ready to use,” Gill says. “It’s so much easier, so much more convenient.” Still, every now and then, when she spots a big fresh hunk of jackfruit at a specialty store, she buys it to make her mother’s sabzi the long way.