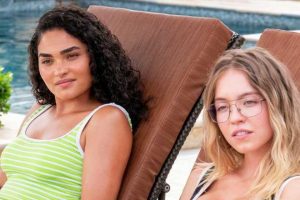 Now is home to some impeccable television – new, old and under-the-radar. Here are the shows you’ll want to add to your watchlist.

In the wide world of streaming platforms, it can often feel overwhelming to narrow down what’s worth watching. From new series to old favourites, films, documentaries and everything in between, it can all get a bit much, can’t it?

Now (formerly known as Now TV) is one of those platforms that many of us have an account for but unless you take the time to go through it at leisure, you’ll be missing out on some of the veritable gems squirrelled away on there.

If you don’t have Sky, the platform grants you access to some of the broadcaster’s best shows, but also some older series that have long been lauded and may have been missed by you the first time around. Think The Wire, Game Of Thrones, I Hate Suzie, Grey’s Anatomy and Mare Of Easttown, among many others.

So, to save you endless scrolling and to conserve some crucial television watching time, allow us to guide you through some of the best series and documentaries that are well worth tuning into Now for.

There’s a reason why this series has continued to wow viewers throughout its three seasons. Well, there’s a whole host of reasons actually. Succession not only has drama and a plotline of utter dysfunction at its core but it’s also relevant, hilarious and has some very relatable family dynamics on show.

The series is all about power, politics and money and, for any literary buffs out there, is a modern-day King Lear. When Logan Roy (played by Brian Cox), CEO of one of the world’s largest media and entertainment conglomerates, considers retirement, each of his four grown children follows a personal agenda that doesn’t always sync with those of their siblings – or of their father.

Succession: Why are we all so obsessed with this dynastic TV drama?

Once Upon A Time In Londongrad

If you love documentaries as much as we do, you’ll be primed and ready to lap up any new release with the excitement of a small child. And when we tell you this is one stellar docuseries, we mean it.

The new Sky documentary homes in on BuzzFeed’s From Russia With Blood investigation by reporter Heidi Blake and her team, which tried to lift a lid on a scandalous international mystery involving Russian oligarchs and 14 mystery deaths. It’s one of those documentaries without a final conclusion but that’s part of the reason why we were so engrossed in it – it mixes true crime, conspiracy, politics and money all together to provide you with a case you can’t stop thinking about.

Sky’s Once Upon A Time In Londongrad: this is why the internet is abuzz with excitement over this new documentary

There’s no denying that life on a holiday resort is rather hilarious. From the early morning tussle for sun loungers to acquiring the prime position at the breakfast buffet and everything in between.

Well, the inner workings of holiday resort life, its residents and staff are put on show for us in this captivating – and hilarious – series, which first aired last year and has since been renewed for a second season.

Without giving too much away, The White Lotus shines a light on themes of class, wealth and social mobility – all with a picturesque Hawaiian five-star hotel as its backdrop. We meet Belinda (Insecure’s Natasha Rothwell) who believes Tanya (Jennifer Coolidge) when she says she’ll invest in a wellness clinic to showcase her holistic skills. We also meet well-meaning manager Armond (Murray Bartlett) who is hiding his own dark secrets, and newlyweds Shane and Rachel Patton (Jake Lacy and Alexandra Daddario) who are adjusting to their new life – of no work and immense wealth – together.

If you’re yet to watch it, you’ll probably consume it in a matter of days – each episode really is so addictive.

The White Lotus season 2: Jennifer Coolidge is confirmed to return to the hit HBO series, which is currently filming in Sicily

As a franchise, the three seasons of True Detective have collectively earned more than 20 Emmy nominations. Why? Well, it not only drops you right in the middle of some harrowing cases, but also gives you a gritty look at the life of the detectives who seek to solve them.

In the first season, we were treated to Matthew McConaughey and Woody Harrelson – who are also executive producers – as the hard-faced police duo tasked with solving a line of murders with cult links. Series two stars Colin Farrell, Rachel McAdams and Vince Vaughn and explores the murder of a corrupt politician, while series three sees Mahershala Ali take the lead. Like we said, enthralling plotlines and a stellar cast – you may become a little too engrossed in it all.

This 2018 drama might have flown under your radar the first time it aired but if you love Gone Girl, you’ll most definitely love this adaptation of Gillian Flynn’s bestselling novel.

It stars Amy Adams in her first major role on the small screen as reporter Camille Preaker, who returns to her small hometown to investigate mysterious, unsolved crimes. Two girls are missing, one of whom is found dead and presumed murdered. As she searches for clues, Camille reunites with her estranged family – overbearing mother Adora (Patricia Clarkson), stepfather Alan Crellin (Henry Czerny) and half-sister Amma (Eliza Scanlen).

Through a series of flashbacks, we start to piece together Camille’s own traumatic childhood, which involves the death of her younger sister. She begins to identify with the young victims a bit too closely and you’ll definitely want to pay attention to every detail in this one – it has a plot twist you won’t see coming.

The Jinx: The Life And Deaths Of Robert Durst

If you’re a true crime fan, you’ll have likely watched this defining 2015 documentary but if you haven’t, allow us to introduce you to the chilling world of The Jinx.

It’s not only an Emmy award-winning docuseries but if there was ever a series to hone in on the art of a cliffhanging last scene, it’s this one. The documentary explores the case of Robert Durst, a wealthy New York real estate heir and convicted murderer. It investigates the unsolved 1982 disappearance of Durst’s wife Kathie, the 2000 execution-style killing of writer Susan Berman and the 2001 death – and dismemberment – of Durst’s neighbour Morris Black in Galveston, Texas.

But the most interesting thing about this documentary is the fact that we hear from Durst himself, who had wanted to be interviewed by director Andrew Jarecki and subsequently sat with him for more than 20 hours over the course of several years. The series garnered so much attention that it led to Durst’s arrest before the finale aired.

Best true crime podcasts: 45 gripping series to listen to in 2022

You know the year is flying by when it seems like just yesterday that we were all gripped by worldwide Euphoria pandemonium. As well as having a track list we’re mildly obsessed with, this drama about teens is as far from a teen drama as humanly possible.

It’s got everything from family drama to drug addiction, romance and friendship betrayals. And lest we forget the iconic fashion and make-up looks that led to us buying facial diamantés and glitter eyeshadow. While the season two episodes were released weekly this past February, both seasons are available to stream on Now in their glorious entirety. You’ll want to strap in for your fair share of heartache and shock but something about that intoxicating mix makes this show one that you won’t be able to stop watching.

Euphoria season 2 episode 5: we need to take a moment for Zendaya’s stellar acting in her painful intervention scenes

Our most recent drama series obsession is, undoubtedly, The Staircase. The new Sky series manages to blend true crime, a star-studded cast and stellar acting to bring a well-known case back into the spotlight once more.

The mystery death of Kathleen Peterson – who was found at the foot of her home’s staircase in a pool of her own blood – has long stumped everyone who comes across the case and was also the focus of a Netflix documentary. In this drama, however, we get a sense of the case from the inside – from the makers of the documentary, from her family and those who believe in other theories surrounding her death altogether.

As well as Toni Collette and Game Of Thrones’ Sophie Turner, Colin Firth delivers an unflinchingly great performance as Michael, the charismatic, yet elusive, widow. It’s not to be missed and even if you have (or have not) watched the documentary, this drama is one that should be added to your watchlist now.

Sky’s The Staircase: the new true crime drama is much more chilling than the Netflix documentary and it’s all because of Colin Firth

Scenes From A Marriage

What would a TV round-up be without the inclusion of some kind of drama that forces you to confront your own relationship patterns? Scenes From A Marriage not only delivers one of the most engrossing performances we’ve seen from an on-screen duo but is also so intense, you won’t be able to tear your eyes away.

Starring Jessica Chastain and Oscar Isaac, this remake of the 1973 Ingmar Bergman mini-series of the same name is written and directed by Hagai Levi (The Affair). It’s got the same intoxicating nature as The Affair and hones in on the small, yet very notable, moments of a marriage falling apart. It also manages to weave in explorations of stay-at-home fathers, deception, love and some behind-the-scenes shots of both the leading actors that remind us that it’s all very much fictitious, although its searing episodes may have you believing otherwise.