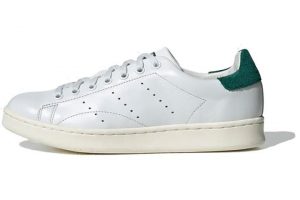 The Adidas Stan Smith will forever live on as one of the greats. Following its rebrand from French tennis player Robert Haillet in 1978, the model took the world by storm and maintains its status today. From the slip-on mule to the celebratory “Stanniversary” rendition, it has previously received a variety of reworks and is now introduced with a ’60s update.

Revamped in its original color scheme, the Adidas Stan Smith is supplied with a court-ready approach. The pair is displayed with a plump white leather upper, featuring rounded edges for a vintage look. Adidas’ Three Stripes logo is exemplified at the medials in a perforated manner, while the rears don fuzzy “Collegiate Green” heel tabs reminiscent of tennis court flooring. Branded markings decorate the tongues with an illustration of the player’s face. This dated arrangement rests atop a yellowed rubber outsole for pristine comfort.

The pair is priced at $150 USD and will be available via Adidas and select retailers on September 5.

In case you missed it, ACU and Li-Ning deliver a back-to-school way of wade 10 “Top Scholar”.
Source: Read Full Article