Home » Entertainment » The Advanced Visual Tech in 'Avatar: The Way Of Water' Crashed Some Movie Theater Projectors in Japan

The Advanced Visual Tech in 'Avatar: The Way Of Water' Crashed Some Movie Theater Projectors in Japan 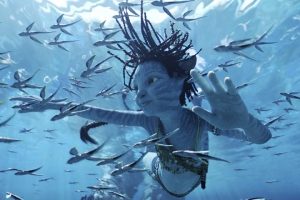 “Water can flow … or it can crash,” Bruce Lee once famously quipped. Lee was discussing martial arts when he made that statement, but it applies to the recently-released Avatar: The Way Of Water The James Cameron-directed epic boasts cutting-edge visuals and animation techniques, which were too much for some theaters in Japan to handle per a report from Bloomberg.

Avatar: The Way Of Water uses high frame rate playback (commonly referred to as HFR) to achieve its striking, fluid visuals. HFR offers a stunning 48 frames per second (FPS), twice as much as the standard 24 FPS used by most modern films In Avatar specifically, fight scenes are rendered at 48 FPS while standard slow-paced scenes are able to be rendered at 24 FPS due to frame replication. However, HFR playback is a new technology that most theaters are not set up for: proper rendering of HFR requires the very latest projectors or costly upgrades to existing projectors.

Avatar: The Way Of Water is available to theaters in multiple formats that include both 2D and 3D in HFR — for 3D films, HFR can reduce eye fatigue and nausea — as well as a standard 24 FPS version. Engadget notes that most movie theater chains are aware of which formats they can play, but as HFR is a new technology that’s not frequently available they may not have noted they weren’t receiving a proper version of the film for their projectors.

Japanese moviegoers claimed that theater chains like Tohol Col, Tokyu Corp. and United Cinemas Co. turned viewers away from screenings and issued refunds, though none of the chains commented on the issue. One theater in Central Japan had to reduce the frame rate from 48 FPS to 24 FPS mid-film for a smoother viewing experience. Though the film enjoyed the biggest first week in Japanese box office history, it was topped by long-awaited anime movie The First Slam Dunk last weekend as well.

Elsewhere in the world of entertainment, check out everything coming to and leaving HBO Max in January 2023.
Source: Read Full Article