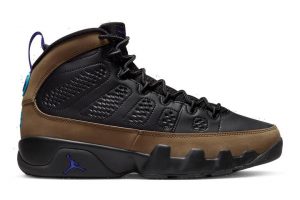 It can be easy to overlook the Air Jordan 9 as it has played a minor part in Jordan Brand’s annual offerings the past few years. Recently, the silhouette has lacked any flashy collaborations while keeping its retro releases limited as well. However, as it continues to be outfitted in smart colorways that are devoid of any gimmicks or fads, the sneaker solidifies itself as an undeniable staple in the Air Jordan roster.

The latest approach on the soon-to-be 30-year-old shoe is a “Light Olive” that remixes its OG “Olive” look with “Bright Concord” and “Aqua” accents. Appearing with a black leather base for its upper and a soft greenish-brown at its nubuck mudguard and heel overlays, the sneaker recreates its predecessor’s upper faithfully, save for its branding elements serving as a twist. The aforementioned blue and purple accents appear at the tongue, sockliner, sole and heel branding alongside the rear’s heel tab. Additional sole specifications include an all-black finish that also matches its tongue, lining and laces.

As of now, Nike has yet to disclose any official release information for the Air Jordan 9 “Light Olive.” It is currently expected to launch on January 7 via Nike and select retailers at a price of $200 USD.