Home » Entertainment » The Best Thrillers of 2020 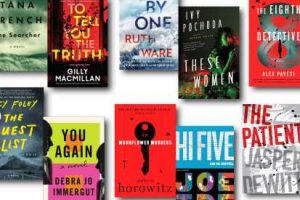 A new Tana French is always cause for celebration, even when it doesn’t feature the textured, compromised detectives from the fictional Dublin Murder Squad. THE SEARCHER (Viking, 451 pp., $27), French’s second stand-alone book, stars a weary retired cop who has fled his old life in Chicago for the quiet obscurity of rural Ireland. That is, until he is thrust headlong into a new mystery that will require all his emotional acumen as well as his skills as a policeman. Read it once for the plot; read it again for the beauty and subtlety of French’s writing.

Reality and delusion intermingle in Gilly Macmillan’s TO TELL YOU THE TRUTH (Morrow, 320 pp., $26.99), a book that ponders what might happen if two novelists got married and only one turned out to be successful. Lucy Harper, an acclaimed crime writer who regards her recurring character, Detective Sgt. Eliza Grey, as a real person, has just turned in her latest manuscript. Alas, she has also saddled Eliza with a disfiguring injury. Eliza’s anger at her creator — it seems she’s being written out of the series — is no match for the anger of Lucy’s publisher or the needy, childish response of Dan, her husband. When Dan disappears and a mystery from Lucy’s past resurfaces, things get even more complicated.

What could possibly go wrong when a bunch of pretentious, squabbling executives from an internet start-up take a company retreat in a secluded mountain chalet during avalanche season? More to the point, in a book called ONE BY ONE (Gallery/Scout Press, 384 pp., $27.99), who will die first? The always reliable Ruth Ware presents us with a houseful of secretive characters who have no internet connection or cell service and who all seem to be good candidates for an early demise. Also, one of them is a murderer.

Ivy Pochoda tells the story of a serial killer through the accounts of five female narrators with overlapping histories in her powerful, disturbing novel THESE WOMEN (Ecco, 352 pp., $23.99), set on the streets and in the marginal neighborhoods of Los Angeles. Women have been dying for years — sex workers, street people, people of color — but nobody has been paying much attention. Nobody, that is, except Essie, a diminutive, dogged police officer haunted by a terrible tragedy in her own past and thwarted at every turn by the men on the force. Can she make people listen and find justice for the women who have been lost?

In THE EIGHTH DETECTIVE (Holt, 304 pp., $26.99), Alex Pavesi’s cerebral box of delights, an editor for a British publishing company matches wits with a reclusive author who wrote a book of short detective stories years earlier and then disappeared into obscurity. The stories, happily reprinted here in their entirety, are diabolical and often cruel, and each reflects a different approach to the classic detective story — a different configuration of victim, suspect and detective. But as the editor reviews the stories with the author so that she can republish the book, anomalies and inconsistencies in the plots emerge, an uneasiness sets in and it becomes clear that there are some urgent real-life mysteries at play.

You are cordially invited to a wedding on a virtually uninhabited island off the coast of Ireland that will soon be made inaccessible because of a violent storm. The bride and groom are perfect together — she’s a glamorous fashion editor; he’s the hunky star of a reality television show that allows him to show off his wilderness-survival skills — yet they appear to barely know each other. The actual guests in Lucy Foley’s highly entertaining THE GUEST LIST (Morrow, 320 pp., $27.99) turn out to be replete with problematic pasts and possibly murderous secrets. One thing is certain: At least one person will die before this ghastly celebration is over.

In New York City in 2015, 46-year-old Abby Willard, the heroine of Debra Jo Immergut’s startling YOU AGAIN (Ecco, 288 pp., $27.99), sees an unsettling sight outside her taxi window: herself, walking down the street at the age of 22. Further sightings of the younger Abby going about her daily life lead Abby into an anxious re-examination of her past (and her sanity). To make matters worse, her possible descent into hallucination coincides with her teenage son’s newfound enthusiasm for antifa-style political activism. What should Abby have done differently? It turns out that her younger self has a few things to tell her, too.

Anthony Horowitz’s fiendishly plotted MOONFLOWER MURDERS (Harper/HarperCollins, 608 pp., $28.99) is really two books in one — the novel itself, and an Agatha Christie-esque golden-age murder mystery that is embedded, fully formed, inside. Susan Ryeland, who edited the book-within-the-book (its author has since died), is hired to scour it for clues that may have a bearing on a pair of modern-day mysteries: a murder in which the wrong man may have been convicted, and the disappearance of a woman in Suffolk, England. The extraordinarily prolific Horowitz is cleverer than you, and one can only marvel at the ingenuity of his solution.

Playful, fresh, full of life, Joe Ide’s sparkly prose will seduce you into HI FIVE (Mulholland, 352 pp., $27), the latest in his series set in South Central Los Angeles and starring the unlikely private investigator Isaiah Quintabe, a.k.a. IQ. This is a land of warring gangs, petty criminals, sketchy side-hustlers and people trying to make a quick buck. IQ, who specializes in helping clients who would prefer not to deal with the police, is approached by an unsavory arms dealer eager to prove that his beloved daughter, Christina, is innocent of murder. A complicating factor is that she has five different personalities, not all of whom agree on the facts of the case.

There’s a lot of insanity flying around in Jasper DeWitt’s THE PATIENT (Houghton Mifflin Harcourt, 224 pp., $23), which takes place in a forbidding state psychiatric institution somewhere in Connecticut. But who is crazier: Joe, an evil, dangerously untreatable patient who has been locked up for more than 20 years, or Parker, the brash young doctor who waltzes in with a new treatment plan he naïvely believes will succeed? Also, what is that “sepulchral, moist, hacking chuckle that sounded like it came from a rotting throat” that appears to be emanating from Joe’s room? Maybe it would be better to leave the patient alone.

END_OF_DOCUMENT_TOKEN_TO_BE_REPLACED

END_OF_DOCUMENT_TOKEN_TO_BE_REPLACED
We and our partners use cookies on this site to improve our service, perform analytics, personalize advertising, measure advertising performance, and remember website preferences.Ok