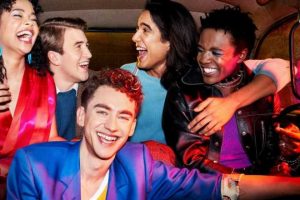 From high-brow thrillers to surreal game shows, the Stylist team pick the best things they watched in 2021.

It’s been quite a year! Yet again. And while large swathes of it have been spent battling anxiety/not socialising or seeing people we love/weighing up if going on a holiday will be more or less stressful than working out the Covid requirements to get there, there have been some slivers of light. For one, the sheer volume of brilliant TV that we’ve been gifted. Whether that’s a beautiful coincidence or because the world knows we need something to entertain us, we’ve been spoilt for choice for what to watch.

So as the end of 2021 draws near, and our festive period seems as uncertain as ever, the Stylist team members reflect on their one favourite show of the year. Add them all to your watchlist now…

We Are Lady Parts on Channel 4

We Are Lady Parts by Meena Alexander, Features Editor

Oh how I needed a laugh when I wearily flicked on Channel 4 that random night in May, when Covid restrictions were still in place and felt like they had been for a hundred years. Like everyone, I missed my friends, I missed silliness, I missed fun for fun’s sake. It was the title that caught my eye – We Are Lady Parts – intriguing, even if I was resigned to it being the sort of borderline dodgy reality show we’ve come to expect from late-night TV.

What I found, instead, were 25 minutes of unbridled joy. A punchy sitcom from Nida Manzoor, We Are Lady Parts tells the story of geeky biochemical engineer Amina, who becomes the unlikely lead guitarist in an all-female Muslim punk band determined to land their first gig. The short episodes are expertly written, so it’s genuinely laugh-a-minute, and seeing such a diverse array of Muslim women put front and centre (and clearly having the time of their lives) made my heart sing. From the moment the eponymous band started singing their debut song Voldemort Under My Headscarf, I was rooting for them. I’ve since recommended the show to anyone in need of a good dose of empowerment, sisterhood and a big old belly laugh.

This three-part series is not so much about Naomi Osaka as a top league tennis player but as a deep thinker – an introverted icon who has been conditioned for success but wrestles endlessly with the question: what happens if I lose?

A quiet, poignant film, its Netflix release came after Osaka withdrew from the French Open citing ‘long bouts of depression’, and while the film doesn’t cover those events, it gives fascinating insight and context as to what might have led her there.

Self-doubt, loneliness and confusion overshadow Osaka’s interior life, while her team and the wider world hungrily await new triumphs on the court. I was particularly struck by a scene in which Osaka is celebrating her 22nd birthday at a restaurant and asks her mum: “Did you think by the time I was 22, I would have done more?” More?

Osaka’s experience of success is distinctly lacking in joy and the relentless call of the practice court shows how mundanely repetitive being a top-flight tennis player can be, but it’s not all bleak. In the final episode, Osaka finds her voice and flexes her power towards the issues she cares about – Black Lives Matter, injustice in Haiti. I was thoroughly absorbed – and I really hope the team around Emma Raducanu has watched it too.

Mare Of Easttown on Sky and Now

While I expected Kate Winslet’s return to TV to be something special, I never expected it to be as good as Sky’s Mare Of Easttown. The crime drama – which aired back in April this year – follows the story of Mare Sheehan (Winslet), a small-town Pennsylvania detective tasked with investigating the murder of teen mum Erin McMenamin.

But Erin’s murder is just one aspect of the drama’s gripping plot. Over the course of seven episodes, the show delves into the complex lives of the town’s residents, from the mysterious disappearance of a young girl called Katie Bailey to the relationship between Mare and her late son, Kevin. This isn’t one of those crime dramas which ends with a disappointing conclusion, either – while I won’t spoil what happens (you won’t see it coming, trust me), the finale was hands down one of the best things I’ve watched on TV all year.

In short, if you’re looking for a twisted and compelling crime drama to watch this Christmas, Mare Of Easttown should be top of your list.

Watch on Sky and Now

I’m getting old and cynical, but at times I get the feeling that nothing on TV can surprise me anymore, which is why the arrival of Nine Perfect Strangers on Amazon Prime towards the tail end of the year didn’t get me too excited – until I started watching it.

Rich, dark and bleakly funny, it’s so close to the bone it hurts. And while the dystopian take on the shadowy “wellness” industry and increasingly weird “retreats” is effective, it’s the subplots and performances that really steal the show, from the beaten down Tony (Bobby Cannavale) to the impeccably uptight author Francis (Melissa McCarthy) and spoilt high-maintenance influencer Jessica (a star turn from Samara Weaving). And then there is that moment, a delicious out of nowhere twist that knocked my shoes and socks off, care of the butter-wouldn’t-melt Carmel (Regina Hall). Top telly!

At the beginning of the year, during a national lockdown, Russell T Davies’ poignant drama It’s A Sin astounded critics, moved viewers (including this one) to tears and became Channel 4’s most-watched drama series in its history.

Following the lives of a group of friends at the beginning of the Aids crisis in 1980s London, the show was lauded for its joyous evocation of young LGBTQ+ life, as well as shining a spotlight on the devastating impact of the epidemic on the British gay community, whose stories have largely gone untold.

Now the year is coming to a close, I still find myself thinking about it, which really shows the power of great storytelling. But beyond breaking viewing records, the conversations around LGBTQ+ history, HIV awareness and inclusive school curriculums that have sprung up in the aftermath prove that TV really can spark change beyond the small screen.

One show, and one show alone, has got me through the last 19 months. A show that is utterly bonkers and a joy to watch. A show that has seen Noel Fielding, Daisy May Cooper and Aisling Bea compete in various surreal tasks. A show that, this year, saw Victoria Coren Mitchell ride a bike for the first time ever, encouraged the hilarious Morgana Robinson to paint a space hopper green, and made Desiree Burch drink a drink without closing her mouth.

Confused? Of course you are. But just watch it. Fall in love with it. And then watch all the previous series on catch up.

Following a year-and-a-half hiatus, I couldn’t have been more ready to welcome Sex Education back into my life. But after such a build-up, I was half-preparing for the much-anticipated third series to be disappointing. Luckily, though, it was as refreshing as ever. The holy trinity – Otis, Maeve, Eric – joined by the series’ usual roster of familiar characters, plus a couple of new additions, including Hope (played by Jemima Kirke) and Cal (played by Dua Saleh), made for an excellent comeback. Emotional storylines coupled with plenty of humorous moments – most memorably in the form of a shambolic school trip and a rogue goat – were exactly what I needed this year.

A good show is one that leaves a lasting impression and nothing has stayed with me longer than BBC’s Time.We follow Mark Cobden (Sean Bean), a sympathy-inducing husband, teacher and father who kills a man after drink-driving. Consumed by guilt, he has to face the dark realities of prison life. The prison officer in charge, Eric McNally (Stephen Graham), has a strong moral compass and relatability that the inmates admire – until he has to engage with corruption in order to save his own son.

Time is underpinned by the dilemma of what makes a person ‘good’ or ‘bad’ and each scene is laced with such palpable tension that you never quite know what’s coming next. The sense of threat always closely looms but the series also gives a voice to a prison population that is often forgotten in these dramatic narratives.Admittedly, I didn’t know if I’d be able to get through all three episodes: it’ll leave your heart racing, mind whirring about the penal system and, in my case, in a steady flow of tears. Everything about Time is harrowing but it is a truly excellent drama.

I don’t want to be that person, but… I was one of the first people to watch Netflix sensation Squid Game, the nine-part drama that went on to become its biggest ever original show. I had no idea what I was watching at first, and quite frankly would never usually watch a dystopian drama where hundreds of people get brutally murdered in episode one, but was instantly compelled by the brilliantly drawn characters, anti-capitalist messaging and striking visuals. Plus, in a year when I’ve scrolled my phone more than ever keeping up with breaking news, it was a relief to have to put it down and fully immerse myself in the captions.

Also, I have to give very honourable mention to Dopesick. The series on Disney+ hasn’t quite finished yet, but it still gets a spot on my list. It’s a gut punch of a drama, based on a real story, that explores how a pharmaceutical company spearheaded addiction to opioid Oxycontin across America. It’s not going to leave you feeling particularly festive, but it will open your eyes to a scandal that destroyed thousands of lives.