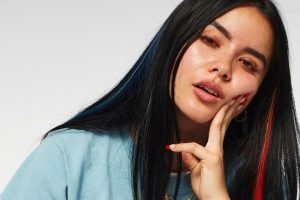 THE BLOSSOM, also known as Lily Lizotte, has arrived with an all-new video titled “SPORTS CAR” that finds the budding star kicking into sixth gear. Fresh off the release of their latest single, “SPIKE COLLAR,” and recent EP, 97 BLOSSOM, which featured help from her good friends and Brockhampton’s own Kevin Abstract, Romil Hemnani, Matt Champion and more, THE BLOSSOM bares their soul on the new single, which premiered on Triple J’s Good Nights — the #1 new music radio show in Australia.

Splitting time between New York City, Los Angeles and Sydney throughout their life, THE BLOSSOM is well traveled and it shows. On “SPORTS CAR,” THE BLOSSOM drifts through racetrack visuals, burnouts, motorcycle crashes and backyard mischief as they work their way through the rubble singing, “I do it all, just to say I’m different/And then again, I’d still never fit in.” Sporting a vintage Hysteric Glamour top, Tripp NYC skirt and Reebok boots, THE BLOSSOM puts on full display the visceral range of their slow-burning emotions into their grungy shoegaze, showcasing incredibly unique songwriting and a deep bag of references. The Danielle Nemet-directed green screen fits like a glove, alongside their father Mark Lizotte’s notable strings.

THE BLOSSOM’s vulnerability and singularity is precisely what has awarded them such a dedicated fan base and placed them amidst a community of like-minded artists, “SPORTS CAR is the energy of my project in full effect. Lamenting the past, present and future…I’m in a perpetual state of dreaming,” says THE BLOSSOM. “Boisterous while swerving out of the hell-ish turmoil I’ve been slugging through. My burning youth, head in the clouds and stretching out my growing pains to grab something bigger. I build small homes and carve out spaces in my mind for pain, insecurities and all my fears.”

Check out the all-new “SPORTS CAR” video above, as well as, watch the THE BLOSSOM in candid conversation with Brockhampton’s lead man Kevin Abstract for “In What Orbit Is Your Dreaming?”