Home » Entertainment » The Catharsis of ‘Pen15’

The Catharsis of ‘Pen15’

It’s hard to find something Anna Konkle and Maya Erskine don’t know about each other.

The 31-year-olds met as undergraduates studying experimental theater at New York University, and in the decade or so since, they’ve caught each other up on most of their teenage experiences. In a “crazy experiment,” as Erskine described it, they took this openness and made it the core of their first TV show: “Pen15.”

“The show is our stories and our secrets,” Erskine said.

Six years ago, when Erskine and Konkle started working on the series (which they created with Sam Zvibleman), the only depiction of middle school that seemed to accurately portray their experiences was Todd Solondz’s 1995 film “Welcome to the Dollhouse.” (Today a list of raw middle school offerings could also include Bo Burnham’s “Eighth Grade” and “Big Mouth” on Netflix.) 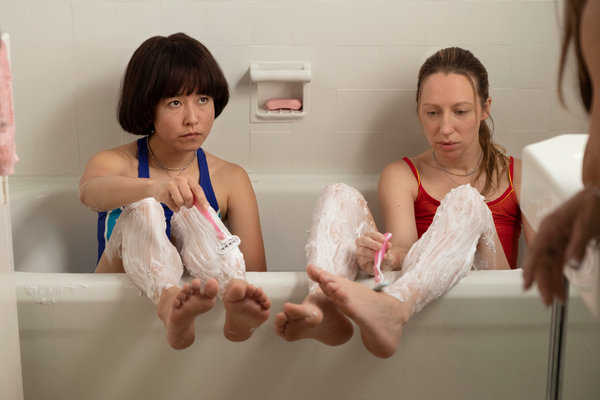 Being 13 is so often a total nightmare, defined by feelings of guilt and shame. I remember being confused about pretty much everything at that age: what to wear, what to say — even what to want. All that drama and all those authentically high stakes were exactly what Erskine and Konkle were looking for as storytellers.

Viewers have been sending messages thanking Erskine and Konkle for how “Pen15” makes them feel seen and heard. “That makes us feel the same thing,” Erskine said. “Someone else saying that they relate to our experiences or had the same thing happen to them is so gratifying.”

Pouring so much of themselves into the show has been an intense experience. (Yes, you are supposed to read the title as one word and feel like a middle schooler.) For Konkle, the connection with viewers has been “extremely cathartic and positive” and also “really vulnerable and emotional.” For Erskine, the acting part of the process has been especially illuminating. “I didn’t realize that certain traumas that we had written about were actually still as raw as they are in my life,” she said. “We would talk about that, but actually experiencing that was shocking.”

This was especially true of the episode “Posh,” which is based on Erskine’s experience of dressing up as the Spice Girls with her white friends. Erskine, whose father is white and mother is Japanese, was told she had to play the pop group’s sole black member, Mel B, also known as Scary Spice, because of her race. At the time, none of Erskine’s friends stood up for her. But in the show, with the benefit of a script written by adults, Anna desperately tries to make amends.

“It was like we were correcting history in a slight way by just having [Anna] acknowledge what I was going through,” Erskine said, “and that was enough, just sort of facing it.”

Anna’s attempts to solve racism only end up hurting Maya more, and the episode becomes a sendup of a “white person being like, ‘I’m going to fix this for you,’ and that really not being the answer,” Konkle said.

Even as Konkle’s character does a better job of reacting to racism than she herself did at 13, she worried about her performance hitting the right note and not making Anna seem like the victim. It was a difficult episode to film; at one point, Erskine broke down on the set, and then Konkle immediately broke down, too.

There are other middle school memories that “Pen15” does not try to correct. Konkle’s abiding memory of her first kiss is of using her whole hand to wipe her mouth afterward. In the show, Anna has her first kiss with Brendan, a boy she meets in band. “He put his tongue in my mouth, and he did like a torpedo cat tongue and, like, drilled my mouth,” Anna tells Maya afterward.

Filmed in extreme close-up, the excruciating kiss was actually between Konkle and her real-life boyfriend. When the camera pulls back and Brendan walks away, the lower half of Anna’s face is shiny with spit, which was actually strawberry flavored lube. “It made my face tingle,” Konkle said, which “was like a little treat.”

[Read more about “Pen15” and the rise of the middle school girl in pop culture.]

When Maya gets her period, she keeps it a secret, which Erskine also did for an entire year. Maya’s mother is played by Erskine’s real mother, Mutsuko Erskine, whose acting debut here has been so well received she’s now getting calls for auditions. The set for Anna’s house looked so much like Konkle’s home before her parents got divorced that walking into it for the first time really threw her.

“Pen15” takes these intense personal experiences and weaves them into a love story between friends. “There’s definitely something about a friendship — especially at that age, but if you’re lucky, forever — that’s the difference between survival or not,” Konkle said. “If I had been left alone at that age, in the circumstances that I felt inside, I don’t know where I would be. So, we were definitely playing with that nightmare.”

Like many aspects of the show, Anna and Maya’s relationship plays out on several levels: In the first episode, Anna describes Maya as “the rainbow gel pen in a sea of blue and black writing utensils,” but their shared plea of “don’t leave me” in the finale had tears streaming down my face.

That final episode was one of the moments when I forgot that the actors weren’t middle schoolers themselves. “That was always the dream that people would forget for a minute that we were adults,” Konkle said.

My suspension of disbelief was, in large part, because of how well the pair depict the physicality of being 13. “I was always a thin girl growing up, and I was very self-conscious about my stomach,” Konkle said. That was especially true after Britney Spears’s “Baby One More Time” video came out. This led to her character’s habit of standing with her hand held against her opposite hip.

For Erskine, acting starts with her character’s physicality, and that informs what’s happening on the inside. She remembered hunching to try to hide the fact she was developing breasts, and so did Maya. Just as they drew on memories from middle school, their bodies have remembered what being 13 was like, too.

Hulu hasn’t renewed the show for a second season yet, but if it does, Erskine and Konkle plan to keep their characters suspended in seventh grade, “like ‘The Simpsons,’” Konkle said. They have plenty more traumatic middle school experiences to mine, from Erskine’s getting reprimanded for showing some boys a girl’s bedroom at a party, to Konkle’s waking her mom up in the middle of the night to tell her she had gotten in some very minor trouble.

Making “Pen15” has been “a good reminder to keep being so kind to myself now,” Erskine said, “as well as to the 13-year-old version of me.”