The choreographer Angie Pittman is not interested in shouting to get your attention. And as a dancer of calm, steady radiance, she doesn’t need to.

“I don’t want to have to yell for you to hear me,” she said during a recent interview in Downtown Brooklyn.

In her new work, “Came Up in a Lonely Castle,” Ms. Pittman leans into her natural disposition: quiet. Presented by Danspace Project beginning Thursday, on a bill shared with Johnnie Cruise Mercer’s TheREDprojectNYC, the work honors quietness and its potential, treating it as something full, not lacking. She hopes to create a space in which she can be heard, she said, “as a black woman, at the volume that I want to speak.”

For Ms. Pittman, 28, quiet reflection — or prayer, broadly defined — has always been entwined with dancing. Growing up in Woodbridge, Va., she attended church three or four times a week. Her early dance experiences, long before she took ballet and modern classes, were as a liturgical praise dancer.

Lately, she has been exploring a different form of communal movement: soul line dancing, or synchronized group dancing to hip-hop and R&B (like the Electric Slide and the Wobble). In “Lonely Castle,” she is joined by the longtime line dance instructor Anita Mullin. At a recent rehearsal, the two crisscrossed the sanctuary of St. Mark’s Church (the home of Danspace), in a leisurely line dance of their own invention. They seemed to be dancing not for an audience but for themselves.

“Angie’s work is very internal, like a meditative resistance of some sort,” said the choreographer Tere O’Connor, a professor at the University of Illinois Urbana-Champaign, where Ms. Pittman received her M.F.A. “It’s not about what it will look like necessarily. It comes from an internal motor that gets shaped on the body.”

Since moving to New York in 2015, Ms. Pittman has emerged as a bright but subtle voice in the city’s experimental dance scene, both as a choreographer and a performer. She spoke about learning to line dance, focusing inward and dance as prayer. Here are edited excerpts from the conversation. 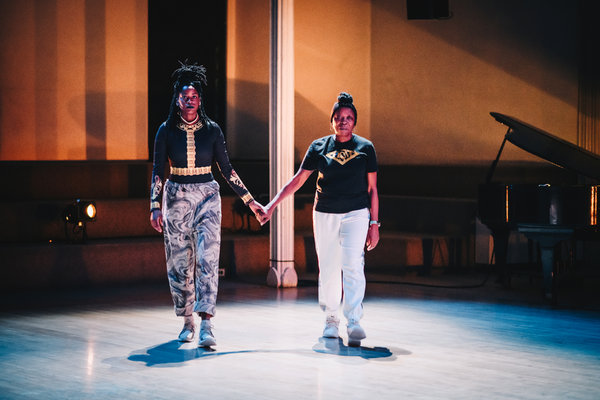 How did you start working with Anita Mullin?

I used to look up line dancing videos on YouTube and learn them in my living room by myself. And I was like, that’s one way to do it, but also, this form is meant to be done in community, so you should go do it in community.

I found a group called the Harlem Smooth Movers, who have these five-hour line dancing parties every month. Anita is the leader, and I started taking her classes. We would hang out, have meals and talk, and eventually I asked her to be in my work.

What drew you to line dancing?

There’s something about line dancing that has always been black to me, and joyful. In a performative practice, it’s hard to figure out what’s for you and what’s for the audience. The gaze can be a really intense presence. But line dancing isn’t for an audience. We’re all in it, not judging it as a thing outside of us.

Tell me about making work in graduate school.

I did a graduate minor in African-American studies, and I took this really awesome course taught by Sundiata Cha-Jua, on lynching studies. It was so deep and so rough. I remember thinking: How are other people in the class dealing with this? Because I could go to the studio and figure out viscerally, emotionally, internally how it was affecting my work today, in my body.

Grad school was a lot of that — of being so this [hovers hands around head] but then figuring out how that translated to the whole body.

How did it translate?

It felt like figuring out which way to position myself, to speak the most truth to the situation. I’m thinking about a heavy subject like lynching that is part of my bones and my flesh and my ancestors and myself now: How can I carry that with me and honor that?

For me the answer wasn’t direct representation or narrative or storytelling. For me it was internal weight and internal complication and internal turmoil in some ways.

How does being a black woman relate, for you, to being quiet?

Growing up, there was this impossible-ness that’s just inherent to being black and a person who identifies as a woman. One of the impossibilities is that you have to be clear, but you can’t be too loud. That was a dichotomy that I still don’t understand.

Do you think that your quiet nature and your interest in dance, a largely nonverbal form, are connected?

Even inside of dance as a nonverbal art form, there are so many volumes. I just did a show at the Whitney with Kevin Beasley, and it was beautifully loud, cacophonous, intense. I wasn’t speaking, but the volume of my dancing was loud as hell. But yes, I probably did fall into dance because it’s like, I don’t have to talk. [Laughs.]

Do you see your new work as a form of prayer?

It is for me as a performer. But maybe also, in its volume, it could cultivate prayer in the audience. That’s a big leap to say, “I have a space for you to pray,” but I believe it.