This spring, no one has asked more of Pam Tanowitz than Pam Tanowitz. She is making more dances than she ever has in her life.

“I’m nervous, and I’m worried, and I stay up at night,” she said in a recent interview at New York City Ballet, where she was rehearsing her latest. “I have so many steps in my head.”

That’s fitting. A modern dance choreographer, Ms. Tanowitz, 49, has a flair for inventing sophisticated steps then turning them inside out. While she may appear to be her usual wisecracking self — she told her City Ballet dancers to “do it quickly again before I get arrested,” referring to the company’s tight rehearsal schedule — she fully grasps the pressure of her situation.

Her approach is to take it one dance at a time. First came a new work for the Martha Graham Dance Company. Next was one for Paul Taylor’s troupe — that will have its premiere in June, along with her first outdoor site-specific piece, conceived with Sara Mearns, the City Ballet principal. Later this month, Ms. Tanowitz will unveil another new work at the Kennedy Center in Washington as part of Ballet Across America, featuring members of both Dance Theater of Harlem and Miami City Ballet. Then there’s her company’s coming tour to London to present “Four Quartets,” her acclaimed work inspired by the T.S. Eliot poems.

Having so much opportunity as a choreographer is rare, but it speaks to Ms. Tanowitz’s range. It’s not just that she’s prolific; in the past few years she revealed her own distinct choreographic voice. Her dances are steeped in movement exploration with steps that reverse and invert like interlocking pieces in a puzzle. Through that rigor, drama emerges.

“Sometimes I think, am I making the same dance over and over again?” she said. “All of these pieces are coming out and there are going to be recognizable things, steps or movements or ideas that I’m working out. So I could very well be, but what’s different is I’m different in relation to each one.”

Ms. Tanowitz said she never imagined she’d be so sought-after as a choreographer, but she has put in her time: She didn’t receive her first grant until she was 40. She worked at New York City Center for 12 years, which afforded her free studio space. One of her jobs, early on, was pouring coffee for patrons at City Ballet during intermissions. 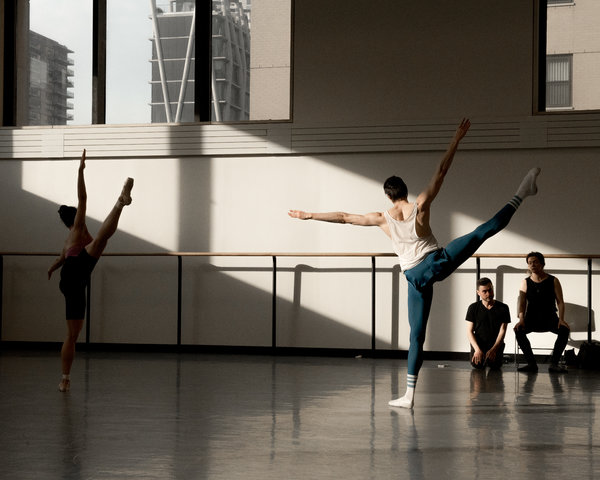 Getting the City Ballet commission — she’s also doing a second piece for the company next spring — was particularly important to her. She is a dance history nerd with a deep affinity for the company and the works of George Balanchine and Jerome Robbins, whose dances make up the bulk of the repertory.

“She has a very refreshing movement vocabulary that isn’t seen very often on the ballet stage,” said Justin Peck, City Ballet’s resident choreographer and artistic adviser. “One thing that really appealed to me about her is that she has a genuine curiosity toward working with ballet dancers and toward working with the point shoe.”

In contemporary ballet, having a choreographer who wants to dig into the intricacies of point work is more rare than it sounds. Still, Ms. Tanowitz was rejected five times by the City Ballet-affiliated Choreographic Institute, which has led to commissions for many, including Mr. Peck and Alexei Ratmansky. She summed up her present situation: “It really is a miracle.”

When Jonathan Stafford, the artistic director of City Ballet, called to see if she could bump up her fall commission to the spring after another choreographer withdrew, she figured out a way to say yes. Her new “Bartok Ballet,” set to Bartok’s String Quartet No. 5, is based on a sketch of a work she created in a workshop at American Ballet Theater two years ago. It will have its premiere at the spring gala on Thursday.

As choreographers go, she works fast. But she likes to experiment during the process. During one rehearsal with the City Ballet dancers, an assistant was anxious that she use her remaining time to run the ballet from beginning to end, but she wanted to tinker with a folk dance embedded in the ballet.

“Let’s just do a quick mazurka experiment: Don’t worry about the counts,” she told the dancers. “Loosen it up — do it like you’re remembering a mazurka from another time or from another dance.”

Judging from the delight on her face it was worth it. “When they don’t count, that makes them look at each other,” she said later. “I’m realizing that more and more is that’s what I care about: people in a room.”

The basic structure of the ballet, an ensemble work for 11, is inspired by the music. Some of the dancing will take place in front of the gold-beaded frame of the proscenium. And it begins and ends with women.

For ballet dancers, Ms. Tanowitz’s vocabulary is both familiar and not. Coordinations are different; she might emphasize a downbeat instead of an up. Gretchen Smith, who has worked with Ms. Tanowitz outside of the company before, relishes the no-frills quality of her movement.

“You’re aware of how clean it is so you want to justify the bareness,” she said. “It calls for you to be so present in the movement and to not add any sort of ballet flair. One day she stopped and said: ‘You guys are doing this weird neck thing. It’s very pretty, but the movement doesn’t need it.’ I love that she knows exactly who she is and exactly what her work is.”

And that’s what Ms. Tanowitz tries to focus on now. “I’m really trying to not get spooked by being in the house of Balanchine and Jerry Robbins,” she said. “I’m trying to just do what I do. I don’t think I would have been able to do this even five years ago. I feel comfortable in dance studios now. All the other stuff falls away.”

Not many midcareer artists find the kind of success that she is enjoying. And not many choreographers would be able to handle so many commissions. But it seems the more dances Ms. Tanowitz has to make, the better they turn out. As for those who think she’s taking on too much?

“Look, people are calling me now and that’s great,” she said. “Someday they’re going to not call me.”

Ms. Tanowitz has spent years honing her craft. She began studying modern dance in fourth grade in Westchester County; when she was in eighth grade, her mother signed her up for an intensive workshop where her teachers were the choreographers Blondell Cummings and Ohad Naharin. In high school, she studied with the choreographer Hanna Kahn, in whose company Mark Morris danced.

She is now friends with Mr. Morris. “He’s so generous,” she said. “He schlepped all the way to New Jersey to see my ‘Goldberg’” — that is, “New Work for Goldberg Variations,” her lauded collaboration with the pianist Simone Dinnerstein. He also advised her on her Bartok ballet.

“He told me to bring the dance forward in the space,” she said. In doing that, the stage immediately becomes more intimate.

After high school, Ms. Tanowitz studied dance at the Ohio State University and returned to New York in 1991; she presented her first show at CBGB’s Gallery. She spent years making dances and showing them anywhere she could — she recalled pulling nails out of a floor in a space on Astor Place so that her dancers wouldn’t get hurt — before deciding to attend graduate school. “I needed to get better,” she said.

Ms. Tanowitz was rejected from New York University and reluctantly attended Sarah Lawrence College, which turned out to be the best thing that could have happened: She met Viola Farber, the former Merce Cunningham dancer, who was the director of the dance department.

“She taught me how to dance,” Ms. Tanowitz said. “She told me thing like ‘Ballet barres aren’t just for ballet dancers’ and my favorite: ‘Dance is not a warm bath.’”

Ms. Farber also imparted her love for Cunningham technique, whose clean lines and footwork can be found in Ms. Tanowitz’s work. But it took time for Ms. Tanowitz to find her voice. A misstep — an early attempt at choreographing a ballet — turned out to be integral to her development.

In 2012, she choreographed “Untitled (the Blue Ballet),” set to music by Morton Feldman; the results were more clinical than visceral. “I was so hyper-determined to deconstruct ballet and to use this really hard music,” she said. “That’s when I realized that dance is not just an intellectual exercise. It has to have heart and head. But I had to go so far out to realize, what’s missing? It was air.”

Right now, she has to remember to breathe herself. During one sleepless night she got to wondering about the dates her ballet was going to be performed.

“I opened the calendar on my phone, and it was ‘Balanchine-Peck-Tanowitz.’ I had a panic attack. I just couldn’t believe it.”

She also noted something else: She’s the only woman. “In 2019, it matters,” she said. “It’s a big deal that I’m on a list with them. So I’m going to own it and be responsible, and make the best dance I can.”