Home » Entertainment » The Crown Season 4 Cast Bid an Emotional Farewell: "It's Been a Bloody Pleasure"

The Crown Season 4 Cast Bid an Emotional Farewell: "It's Been a Bloody Pleasure" 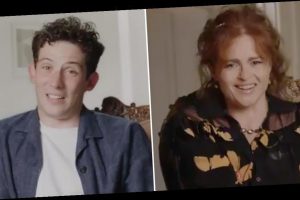 With a new season of The Crown on the horizon, it’s time to say goodbye to a few cast members. Following the release of season four on Nov. 15, Netflix shared a heartwarming video of the stars — Olivia Colman, Helena Bonham Carter, Erin Doherty, Tobias Menzies, and Josh O’Connor — bidding their final farewell. In addition to reminiscing about some of their favorite memories, they also reflected on what it’s been like portraying the royal family over the past two seasons.

Since The Crown documents Queen Elizabeth II’s reign throughout the years, every few seasons a new mix of stars join the show. While Coleman gained critical acclaim for her portrayal of the queen, including winning a Golden Globe, Imelda Staunton is set to take on the role in the upcoming fifth season. The show will also have a new Princess Diana, who was brilliantly played by Emma Corrin in season four. Watch the emotional farewell video from the cast above.