The Disappearing Chimney Sweeps of Paris

As Pete Hawk headed into a Paris Metro station early one morning, he crossed paths with an exiting passenger whose image would haunt him for years.

The man walked fast, head down, smoking a cigarette. His briefly glimpsed face suggested that reaching his 50s took hard labor, while the long-handled brushes he carried confirmed it.

He was a chimney sweep. A chimney sweep! Someone who tunneled through blackened silos and balanced on peaked rooftops, plying a centuries-old trade that counts fewer and fewer practitioners.

Mr. Hawk, a 34-year-old freelance photographer from Sydney, Australia, was captivated. He thought of old films and photos from the early and mid-20th century and wondered how chimney sweeps had changed, how he could document them.

“It remained on the to-do list,” he recalled, “for years.” 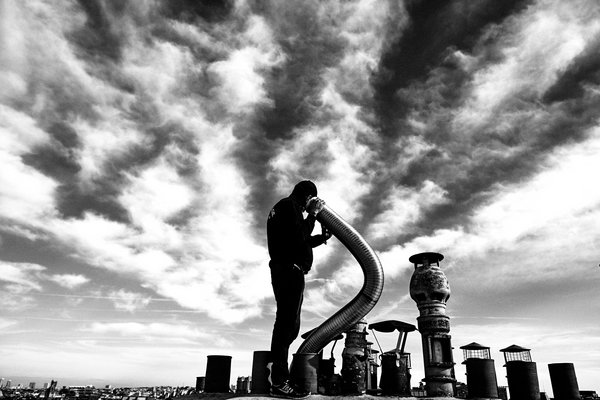 Eight years into photographing Parisian street life and French subcultures — cargo boats on the Seine, drag queens in bars, Europe’s biggest rodeo in the south of France — Mr. Hawk spotted two chimney sweeps waiting at a bus stop. It was the end of summer, the beginning of their work season. One chimney sweep was quite old and carried a small machine to help him breathe. The other was in his early 20s, presumably still new to the trade.

Mr. Hawk knew it was time to delve into this romanticized career. But while he had spotted chimney sweeps ever since he moved to Paris — their bags, with brushes and flexible poles, the giveaway — they were hard to find once he tried. Many people didn’t even know about them. “Even when I told Parisians that I was working on the series,” he said, “they couldn’t believe it.”

The proof is in his project, “Les hommes des toits (The men on the roofs),” black and white images of chimney sweeps out and about, toiling above treetops, arresting silhouettes against Parisian skies.

Theirs is indeed a languishing trade. Mr. Hawk could find only about 20 chimney sweeps in Paris, and only half agreed to let him document them. One chimney sweep, Mikel, 70 years old and 50 years into chimney cleaning, wondered if, in a few years, there might be none.

Yet the experience taught Mr. Hawk that chimney sweeps are a hardy lot. They were unfazed by the weather, the angle of a roof, or the risky access to it. The young ones, like Andreas, from a family of chimney sweeps, could act like trapeze artists on a rope. One day Mr. Hawk captured him break dancing on a narrow platform. Mr. Hawk was indeed fazed. “I was scared for him,” he said, “and told him I don’t want blood on my hands.”

It isn’t the nature of chimney sweeping that has led to its decline in the City of Light. Always dirty, dangerous work — the singing, dancing fairy tale chim-chiminey sweep that Dick Van Dyke played in the original “Mary Poppins” might leave the wrong impression — chimney sweeping has come a long way since orphans and young boys from impoverished families were forced into the trade in Europe and North America 200 years ago.

It is still dirty, still dangerous, and men still die on the job. One man, Mohammed, whom Mr. Hawk documented, said he knew of three sweeps who had fallen from roofs over the years. Only one survived, barely. But wood-burning fireplaces and stoves are losing their luster as science has caught up to their toxic consequences. Paris even considered a ban on wood-burning fireplaces, and more cities are prohibiting wood-burning fireplaces or stoves in new construction. With less wood-burning, the trade is becoming a relic.

Most chimney sweeps that Mr. Hawk met were French, some Portuguese, and most inherited the job from their father or an uncle. It’s a hard day’s work for a living wage, shuffling from wealthy client to client, risking a fall every day. For Mr. Hawk, a member of an Australian photo group called Penumbra Collective, just photographing chimney sweeps proved unpredictable, even scary.

“The dodgy old ladder, sometimes leaning over a staircase, the small window/entrance, the steep slope once you get out the entrance,” he said. “And I had my camera, which I would often pass to them to hold until I got out on the roof. Then there was the slippery roofs, especially in the morning from dew. Once I found a good spot, I would try not to move much.”

He didn’t feel like dying for a story he wasn’t sure anyone was even going to be interested in, he said. Now he hopes to exhibit the series in Europe. “The fact I was going to be a father soon also played in my mind,” he said. “I’m also scared of heights.”