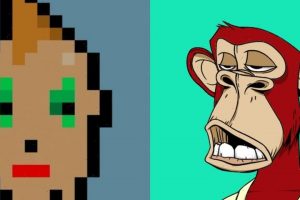 Two of the most popular NFT collections — CryptoPunks and Bored Ape Yacht Club — now have almost the same entry-level prices.

CryptoPunks was created by Larva Labs in 2017 and is largely credited as being the first major NFT project. CryptoPunks have been auctioned at Christie’s and Sotheby’s and have recently sold online for up to $10.26 million USD. As of December 23, the cheapest Punk for sale was listed at 55 ETH ($225,916 USD).

Bored Ape Yacht Club, on the other hand, was created in April by Yuga Labs and has exploded in popularity among its very dedicated fanbase. A rare Bored Ape sold for $3.4 million USD in October and another recently graced the cover of Rolling Stone magazine. As of December 23, the cheapest Ape for sale hovers around 53 ETH ($218,176 USD).

Bored Ape briefly overtook CryptoPunks on Wednesday morning, according to Decrypt, when a CryptoPunk was listed at 52.69 ETH.

Part of Bored Ape Yacht Club’s mass appeal comes from its continued engagement with its community. Yuga Labs says its collectors “own the underlying Bored Ape, the Art, completely,” and grants owners royalty-free license to use the Ape and derivative works in any way they see fit. In addition, Bored Ape has laid out a “Roadmap 2.0” which outlines a number of live events, a mobile competition and a blockchain game for its collectors.