Home » Entertainment » The Grammys, Improbably, Made It Work

The Grammys, Improbably, Made It Work 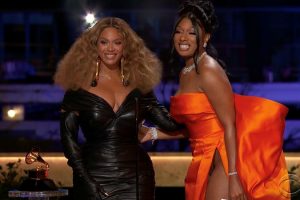 So the Grammys this year were … good? Given the persistent clouds of uncertainty and scandal that have hovered over the ceremony and the voting process behind the awards in recent years, compounded by the impact of the coronavirus pandemic, it was a welcome surprise that the ceremony was, more or less, a success.

There were big wins for Megan Thee Stallion, Billie Eilish and Taylor Swift. Hip-hop stars DaBaby, Lil Baby, Roddy Ricch, and Megan all had impressive performances. Mickey Guyton, Miranda Lambert and Maren Morris showed the power of women in country music. With her four wins, Beyoncé is now tied for the second-most Grammys of all time.

On this week’s Popcast, a conversation about how the Grammys navigated a year of crisis, the minting of a new generation of stars, deserving downballot winners and what happens when the Grammys doesn’t invite the boomer generation?

Lindsay Zoladz, who writes about music for The New York Times and others