The Joker Gets Pregnant and Gives Birth in New DC Comic 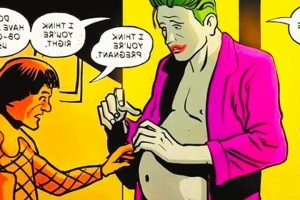 No stranger to shocking storylines, the Joker became pregnant and gave birth in a new comic from DC Comics. In the latest issue of the Joker: The Man Who Stopped Laughing, the iconic Batman is placed in an unexpected story that sees the Clown Prince of Crime introduce a miniature Joker to the world.

Written by Matthew Rosenberg and drawn by Francesco Francavilla, Issue #4 of Joker: The Man Who Stopped Laughing sees the villain confronted by magician heroine Zatanna during his plot to steal Gotham’s water supply. Instead of simply catching the Joker, disgusted by his advances, Zatanna casts a spell that would ensure that no one would ever have his baby.

Though Zatanna’s backward spell, “On eno esle lliw reve evah ruoy ybab!” (“No one else will ever have your baby!”), backfires and the Joker wakes up to discover he is nine months pregnant. Suddenly going into labor, the Joker vomits with the ejected matter morphing to form a mini Joker.

Check out a rundown of the unexpected events in Issue #4 of Joker: The Man Who Stopped Laughing above.