Home » Entertainment » The Life List: The 5 most memorable moments of the Emmy Awards 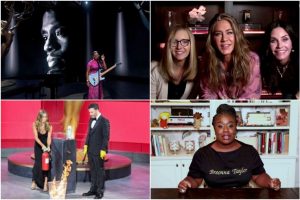 SINGAPORE – The Emmy Awards this year went largely virtual due to the ongoing Covid-19 pandemic, with nominees dialling in from home.

Here are five of the ceremony’s most memorable moments.

1. JENNIFER ANISTON PUTS OUT A FIRE

While most guests participated in the ceremony over the Internet, some stars still managed to share the stage in person with host Jimmy Kimmel.

Aniston was the evening’s opening presenter. She and Kimmel sanitised a results envelop before setting it on fire in a trashcan, in a funny bit intended to demonstrate the show’s high hygiene standards.

But the trashcan continued to burn after they thought they had put the fire out.

A visibly shocked Aniston swiftly picked up the fire extinguisher and quickly put out the flames. And she did it all in heels and a vintage black Dior dress.

2. A SOMBRE IN MEMORIAM SEGMENT

American singer H.E.R. performed a passionate rendition of Prince’s Nothing Compares 2 U for the In Memoriam segment of the show, honouring the stars in front and behind the scenes who died this year.

Kimmel introduced the segment by opening with a tribute to the United States Supreme Court Justice and feminist icon Ruth Bader Ginsburg, who died on Friday (Sept 18).

With no audience in sight, the 23-year-old’s song struck a sombre chord, paying tribute to stars like Regis Philbin, Naya Rivera, Diana Rigg and Chadwick Boseman.

A video of Boseman speaking, layered over the mythical plains of Wakanda – the fictional African nation featured in the actor’s most significant work, Black Panther (2018) – was shown. He died at the age of 43 in August from colon cancer.

With the United States presidential election looming, many stars made known their political beliefs with words and choice of clothing.

Outstanding drama series Succession’s creator Jesse Armstrong delivered a series of “un-thank-yous” to world leaders like Donald Trump and Boris Johnson for their inept handling of the coronavirus crisis.

Mark Ruffalo, who won for his performance in the limited series I Know This Much Is True, emphasised the importance of voting in the upcoming elections.

Aniston may not have picked up trophies for her performance in The Morning Show but at least she had her Friends with her.

The star returned home after presenting the first award of the night and later showed up on video with Lisa Kudrow and Courteney Cox, her co-stars in the iconic comedy Friends (1994 to 2004).

Actor Jason Bateman showed up in the background as well. This was probably the most light-hearted moment of the show.

The most viral moment of the night happened off-screen.

Ramy Youssef – creator and star of the series Ramy lost for both directing and lead actor to comedy Schitt’s Creek.

The 29-year-old then uploaded a short video of a presenter in a hazmat suit-and-tuxedo outfit waving goodbye to him and leaving with an Emmy trophy – captioning it: “When you lose the Emmy.”

END_OF_DOCUMENT_TOKEN_TO_BE_REPLACED

END_OF_DOCUMENT_TOKEN_TO_BE_REPLACED
We and our partners use cookies on this site to improve our service, perform analytics, personalize advertising, measure advertising performance, and remember website preferences.Ok