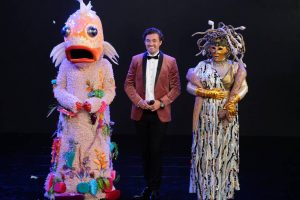 We begin this review with one blindingly obvious question: does Three have any new talent? Or are we going to continue to test the limits of our spatula as we scrape the dregs from the Dancing with the Stars bowl for this entire series?

Given the fact this country is actually bursting – granted it’s within a small pool – with talent, I am genuinely baffled by the recycling of celebs. Are these people trapped in a contract they simply cannot get out of? Please Suzy if you need help, blink three times.

It’s like it’s your 7th birthday and five of your mates got you the same present and now not only are you utterly bored with it, you truly regret hosting this party altogether.

And with that, let us begin episode 5 with the seriously talented Tuatara.

Rhys Darby took a stab in the dark with a guess of Simon Bridges, and since Bridges doesn’t have a show on Three, we know this won’t be the case.

Medusa was up next, and the judges again pretended not to know who this singer was, and it was equally as upsetting as when TrueBliss broke up in 2000.

No, this was not Michelle Visage from RuPaul’s Drag Race, nor was it Anna Paquin. But Medusa is indeed a great singer, and “Tonight” was the night I found my love for her.

Next up, this wild episode also saw the return of my personal favourite costume: Orange Roughy.

But tonight I found myself stricken with this bizarre deja vu. Where had I seen this costume before?

Then it hit me! Roughy had clearly been a previous guest star on Netflix hit show Nailed it. Where contestants compete to make elaborate cakes and absolutely do not nail it.

The proof is in the orange pudding.

Roughy won me over with his fishy moves and honestly, I didn’t think his performance was bad. In fact, he had me hook line and sinker.

The judge’s guesses were in: Glen Osbourne, Robbie Magasiva, Zac Franich and Cori Gonzalez-Macuer. Out of all of these options, Magasiva seemed like the only one who might fit the bill, but because of a highly successful acting career, it still seemed unlikely.

Pavlova was up next and gave out clues that screamed Real House Wives of Auckland, or MAFS, with the line: “I’m not here to make friends.”

But to be fair, I also whisper this to myself as I reluctantly write these reviews.

But at the end of the episode, it was Roughy’s turn to be unmasked, and when he pulled off his mask, I was genuinely surprised.

His costume may have been a roughy, but behind the mask was Three’s smoothest newsreader, Mike McRoberts.

While you almost definitely know McRoberts from Three news, you also probably know him from – drum roll please – Dancing With the Stars!

And according to the utterly cringe bio on the show, he’s also known for being the owner of “New Zealand’s favourite abs”. I’ll leave this here for reference.

We finish this review/recap/honestly whatever I am doing here, with a protip. When trying to figure out who is behind the Masked Singer masks, a simple flick through the Three talent almanac should reveal the identity of the remaining seven contestants.

• The Masked Singer NZ screens on Three on Sundays from 7pm and Mondays from 7.30pm