The Metropolitan Museum of Art said on Wednesday that it would stop accepting gifts from members of the Sackler family linked to OxyContin, severing ties between one of the world’s most prestigious museums and one of its most prolific philanthropic dynasties.

The decision was months in the making, and followed steps by other museums, including the Tate Modern in London and the Solomon R. Guggenheim Museum in New York, to distance themselves from the family behind Purdue Pharma, the maker of OxyContin. On Wednesday, the American Museum of Natural History said that it, too, had ceased taking Sackler donations.

The moves reflect the growing outrage over the role the Sacklers may have played in the opioid crisis, as well as an energized activist movement that is starting to force museums to reckon with where some of their money comes from.

“The museum takes a position of gratitude and respect to those who support us, but on occasion, we feel it’s necessary to step away from gifts that are not in the public interest, or in our institution’s interest,” said Daniel H. Weiss, the president of the Met. “That is what we’re doing here.”

The Met’s relationship with the Sacklers goes back decades, and one of its biggest attractions, the Temple of Dendur, sits in the glass-enclosed Sackler Wing. Mr. Weiss said the museum had no plans to remove the name, as some protesters have demanded.

But its decision to stop accepting future gifts from Sacklers connected to Purdue Pharma, or their foundations, could spur other cultural institutions to follow suit. The family has given tens of millions of dollars and put its name in or on museums, universities and medical schools in the United States, England and Israel.

In the New York area alone, in addition to the Met, the Guggenheim and the Natural History museum, the Metropolitan Opera and the Dia Art Foundation are among the institutions that have received substantial gifts from the Sacklers.

In a statement, the Sackler family members with ties to Purdue Pharma said that “while the allegations against our family are false and unfair, we understand that accepting gifts at this time would put the Met in a difficult position.”

“We respect the Met and that is the last thing we would want to do,” the statement said. “Our goal has always been to support the valuable work of such outstanding organizations, and we remain committed to doing so.”

The move by the Met comes as the Whitney Museum also finds itself caught in the politics of the era, facing growing calls from artists, protesters and even some museum staff members to remove one of its vice chairmen, Warren B. Kanders, from its board. Mr. Kanders is the chief executive of Safariland Group, which sells equipment to law enforcement agencies and militaries, including tear gas, which the art publication Hyperallergic said was used against migrants at the Mexican border. 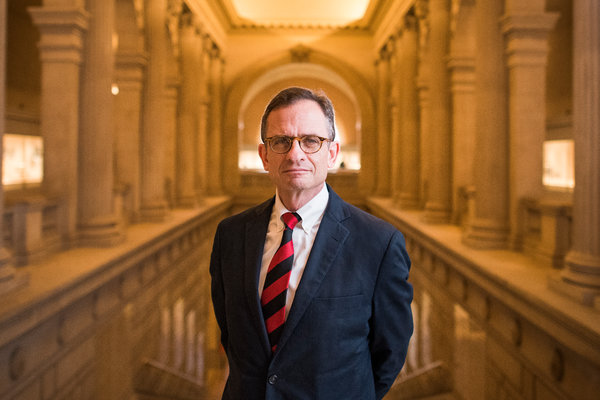 Dozens of artists connected to the Whitney Biennial, a prestigious contemporary art exhibition that begins on Friday, signed an open letter calling for his resignation. And a group called Forensic Architecture, in partnership with Praxis Films, has made its Biennial exhibition a direct challenge to Mr. Kanders: It will show a 10-minute film that documents instances where Safariland’s Triple-Chaser tear gas grenades have been deployed.

Mr. Kanders has rebuffed the demands for him to step down, saying that Safariland’s products, which also include riot gear and bomb disposal robots, protect law enforcement officers and let them defuse dangerous situations without loss of life. He said he had no role in how the company’s products were ultimately deployed.

The increased scrutiny on donors is forcing museums to navigate moral dilemmas and a political climate where a protest can go viral in a matter of hours. At the same time, they must mollify the wealthy benefactors who help keep the lights on and would rather not see their donations open them up to public examination.

There is also the difficult question of where to draw a line. What sort of behavior is inexcusable?

“We are not a partisan organization, we are not a political organization, so we don’t have a litmus test for whom we take gifts from based on policies or politics,” Mr. Weiss said. “If there are people who want to support us, for the most part we are delighted.”

“We would only not accept gifts from people if it in some way challenges or is counter to the core mission of the institution, in exceptional cases,” he added. “The OxyContin crisis in this country is a legitimate and full-blown crisis.”

Three brothers, Arthur, Mortimer and Raymond Sackler, bought a small company called Purdue Frederick in 1952 and transformed it into the pharmaceutical giant it is today. In 1996, Purdue Pharma put the opioid painkiller OxyContin on the market, fundamentally altering the company’s fortunes.

The family’s role in the marketing of OxyContin, and in the opioid crisis, has come under increased scrutiny in recent years. Documents submitted this year as part of litigation by the attorney general of Massachusetts allege that members of the Sackler family directed the company’s efforts to mislead the public about the dangers of the highly addictive drug. The company has denied the allegations and said it “neither created nor caused the opioid epidemic.”

Arthur Sackler died before OxyContin’s creation and his side of the family, which has supported institutions including the Smithsonian and the Brooklyn Museum, sold his stake in the pharmaceutical business after his death. One of his children, Elizabeth A. Sackler, has called the company’s role in the opioid epidemic “morally abhorrent.”

Mr. Weiss, who described the Met’s decision as a “suspension,” said the museum would refuse only gifts from members of the Sackler family closely connected to Purdue. Those gifts have exceeded $200,000 over the last two decades, a small amount for a museum with a $320 million annual budget, but the symbolism was unmistakable.

The family’s contributions to the Met go back some 50 years. A 1978 news release announcing the official dedication of the Sackler Wing said it cost $9.5 million to build — about $36 million in today’s dollars — and called the Sacklers “major donors” to the project. At the dedication reception, which was jointly hosted by the Met and the three brothers, the Martha Graham Dance Company performed a new work at the Temple of Dendur, which was a gift from Egypt to the United States.

Mr. Weiss said that the museum would not take the more drastic step of taking the family’s name off the wing, saying that it was not in a position to make permanent changes while litigation against the family was ongoing and information still coming to light.

The Met also said that its board had voted to codify how the museum accepts named gifts, formalizing a longstanding practice of circulating those proposals through a chain of departments. The decision on the Sacklers, Mr. Weiss said, was made by the Met leadership in consultation with the board.

END_OF_DOCUMENT_TOKEN_TO_BE_REPLACED

END_OF_DOCUMENT_TOKEN_TO_BE_REPLACED
We and our partners use cookies on this site to improve our service, perform analytics, personalize advertising, measure advertising performance, and remember website preferences.Ok